The Agency: A Spy in the House by Y.S. Lee 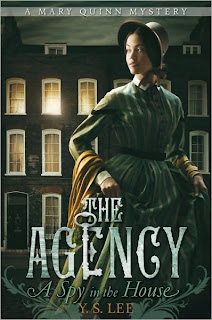 I found this book in one my favorite Chicago independent bookstores, in paperback, and practically smacked myself in the head for not ever knowing of its existence before. I love the Victorian time period, I love England, and I really love lady detectives. This book is all about these three things! It would have to be really terrible for me not to have enjoyed it.
It starts literally at death row, for the main character, Mary. She has been caught red-handed stealing from someone’s home, and is sentenced to death. On her way to her death, she is rescued by the Agency, a group of women who have setup a school for intelligent young ladies who want more in life than what is allowed them. Mary is given a second chance at life, and exceeds at it. She comes to teach at the school, but the story really begins when she meets with the head of the Agency to ask for more than a teaching job.
The agency inducts her into their mystery solving team, trains her in things like self defense, and then immediately places her in the household of a suspected smuggler of culturally significant artifacts. She is supposed to just pretend to be the hired lady’s companion of the daughter of the said smuggler. But, Mary is not exactly the type of character to just hang around and listen. She breaks into factories dressed as a boy, she hides in wardrobes and meets interesting men, she follows suspects around London, and she encourages women all around her to want more out of life than what they are allowed. And she does this all at age 17 (but pretending to be 20).
The general theme of the book seemed to be: do not underestimate women. And I ate it up! While, readers of YA historical fiction will be quick to notice commonalities between this book and other books with strong female leads, what this book has that others doesn’t, is some semblance of truth. Yes, something like the Agency, an organization placing intelligent women around London, acting as spies, is highly unbelievable (entertaining, but unbelievable); however, the London Lee writes about is harsh, cruel, and downright smelly. She writes about the smell of decay coming from the Thames, the unfortunate caste system of the time, the harshness of the lives of the servants, the pain wealthy employers are allowed to inflict upon their workers at no cost to themselves, and the cost of being different in a crowd of blonde hair, blue eyed expectations. We learn early on that Mary has a secret about her heritage. And even before that we learn that her father died when she was young, and her mother had to become a prostitute in order to provide for Mary.
So, yes, Lee writes about an optimistic, beautiful possibility (The Agency) that in no way probabilistically could have existed, but she does not neglect the severity of Victorian England. In a way, I feel she almost wrote it as homage to all the poor women who lived this life with no Agency to save them.
There was one thing that really bothered me (despite all of this). Lee had this habit of skipping over scenes that I really wanted to read about. For instance, the book goes right from Mary’s rescue at prison, to several years later when she asks her supervisors for something more than a teaching job. I would have loved to see something of the school. I wanted to see other girls being rescued. I wanted to know what Mary was like as a student and how long it took her to grow up. How long did it take her to really feel as though she deserved more? Though, I get that the book was not mainly about that; it was mainly about her solving a mystery, which was also good, but would not have been too long with a little more of Mary’s earlier years. Lee also skipped other transitions throughout the story, like what immediately happened after escaping the burning building? I wanted more immediate resolutions before more storyline.
I loved some of the endings of the other characters, especially that of Mary’s companion. But, clearly the ending could not be the end for Mary and her “romantic” interest. It can’t just end the way it did. The book I have has an excerpt from book 2, which is already out, and though there was no mention of the romance, I know it must come back, as will too the secret Mary keeps from everyone (including the Agency). I give this book an 8/10. It would have scored higher if not for the authors inability to transition scenes better; it really did take away from the awesomeness that was the plot and kept making me pause and mentally shake my fist. Did she think the school scenes would have been to Jane Eyre or even X-Men?  Regardless, it still was so much fun to read! And it reminded me a lot of Philip Pullman’s Sally Lockhart series.
Posted by Nori at 10:11 PM