The Gathering by Kelley Armstrong 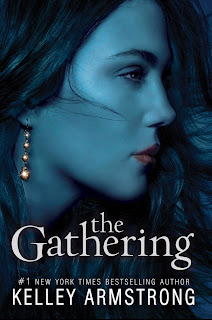 I have really come to love Kelley Armstrong. I loved her other YA series and I love some of her adult books. Again though, like with what I said about Cassandra Clare, she’s not the best writer. It’s her stories that draw you in! And this book is a very interesting story.
The book is loaded with symbols and foreshadowing moments. Some things were easy to predict, and other things were never explained. It is a trilogy, and it almost seems hard to believe that everything will ever get answered. It was sort of like watching a very dramatic/teen angst version of LOST. I mean all the interesting characters are on an island (in Canada -at least we have a location), that’s run by a very mysterious science group…Get the LOST connection?
Any way, the book is all about Maya, an adopted girl with a paw print birthmark, who’s really good at healing animals. Some of Armstrong’s symbols were pretty obvious, and by some, I mean all. Any way, the story revolves around Maya who recently lost her best friend in a drowning accident. Her best friend was captain of the swim team, and Maya is fairly certain someone helped her drown that night. Meanwhile, there’s this love triangle going between Maya her dead best friend’s boyfriend, and the new guy in town (Rafe) who is going through girls like Daniel Meade in the show Ugly Betty, except Rafe seems to be searching for something. Between another murder, a deadly forrest fire, all the fights that go down with so many of the teenagers being prone to angry fits (I wonder what this could mean…), secret drugs being handed out to the occupants of the town, wildcat attacks, and mysteries about parental heritage, this book is loaded with drama.
I love the characters. I love the supernatural aspect to the story because it’s not over done. So many YA supernatural books involve ghost/vampire/angel/werewolf/demon plots that sort of overtake important key points. Here, the supernatural parts are mostly in the background until the end. And even then, they come about in a very LOST type way, meaning the characters and the mysteries are more interesting and more focused on then the fact that someone’s sister is changing into a wild animal.
And my all time favorite thing about this book is the end. It’s not necessarily a cliffhanger. You know more books are coming, but that’s not it. It’s like Armstrong writes something obvious, hoping you will guess the obvious thing, but then changes it at the last minute from the obvious to something way more complicated. And the book ends, leaving you not sure if the characters are being saved or being doomed. I liked not knowing this, and I really liked that she was capable of even writing that.
Stuff I was not in love with: the parents who only acted parental when the time was right…And why was no one ever upset that these kids were leaving school in the middle of the day? Also, the whole Rafe and his sister story should not have just been accepted by that town. Someone should have known that his sister “was in an accident.” Maybe these things will get talked more about in the next two installments. I’ll have to wait to find out. And I certainly plan on continuing this series. It gets an 8/10 from me.
Posted by Nori at 10:00 PM