The Agency: The Traitor in the Tunnel by Y.S. Lee 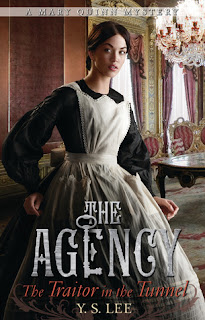 Summary (from Goodreads):
Get steeped in suspense, romance, and high Victorian intrigue as Mary goes undercover at Buckingham Palace - and learns a startling secret at the Tower of London.

Queen Victoria has a little problem: there's a petty thief at work in Buckingham Palace. Charged with discretion, the Agency puts quickwitted Mary Quinn on the case, where she must pose as a domestic while fending off the attentions of a feckless Prince of Wales. But when the prince witnesses the murder of one of his friends in an opium den, the potential for scandal looms large. And Mary faces an even more unsettling possibility: the accused killer, a Chinese sailor imprisoned in the Tower of London, shares a name with her long-lost father. Meanwhile, engineer James Easton, Mary's onetime paramour, is at work shoring up the sewers beneath the palace, where an unexpected tunnel seems to be very much in use. Can Mary and James trust each other (and put their simmering feelings aside) long enough to solve the mystery and protect the Royal Family? Hoist on your waders for Mary's most personal case yet, where the stakes couldn't be higher - and she has everything to lose.
Review:
So, I absolutely adore these books. This is book 3 in a wonderful mystery series, and I’m pretty sure this is my favorite book so far. What’s not to like about disguise, mystery, romance, Buckingham Palace, a little drama (of the Downton variety), murder, family secrets, and of course a secret agency of crime-solving Victorian ladies?
This one in the series stands out for many reasons. For starters, the romance is taken up a notch. Mary really can’t fool herself any longer into thinking she has no feelings for James and their encounters become more and more entertaining. I love all their banter, their arguments, their mutual need to help everyone, and their stubbornness. They make quite the literary match of the best kind (a match made by shared interests, witty dialogue, strong opinions, and friendship).
I also loved reading a YA book that features Queen Victoria as a character. At first, I wasn’t necessarily feeling this author’s interpretation of one of my all time favorite monarchs, but as the book went on, I loved Lee’s version of Queen Victoria almost more than anyone else’s. The feminism that leaps out at you on these pages is wonderful and empowering! And the queen definitely did not end up disappointing me.
I’ve probably said this in reviews of earlier books in the series, but I just love all the historical, gritty details. Nothing is sugarcoated. Monarchs go out on fun nights in opium dens, the Chinese are persecuted for being different, maids are treated like garbage, and women never really have much choice about anything. I know a secret detective agency of women at this time period is rather far-fetched; however, it’s the only far-fetched notion of the book. There are just so many details about the terrible lives people led in this time period that it makes up for this one crazy, yet amazing idea.
A lot is learned about Mary’s history in this one (something she’s very private about). And Mary is seriously pushed to her furthest limits in regards to her family, her job, and her James. The two women in charge of the Agency have hit a wall in their differences and so to top everything off, Mary has to decide which boss she would like to stick with (because there will soon be two agencies).
Y.S. Lee has an amazing strength in writing dialogue and character. Her women are believable. Her characters all have their secrets that you need to find out. (I want to know more about the reporter!) The romance is of the best kind. The mystery has you guessing for the whole book. The setting is spectacular. And I really don’t have a single negative thing to add. This gets a 10/10 from me. And I look forward to the next one.
Posted by Nori at 5:51 PM