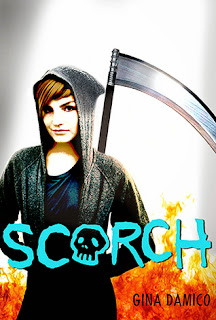 Summary from Goodreads:
Sixteen-year-old Lex Bartleby is a teenage grim reaper with the bizarre ability to damn souls. That makes her pretty scary, even to fellow Grims. But after inadvertently transferring her ability to Zara, a murderous outlaw, Lex is a pariah in Croak, the little town she calls home.

To escape the townspeople’s wrath, she and her friends embark on a wild road trip to DeMyse. Though this sparkling desert oasis is full of luxuries and amusements, it feels like a prison to Lex. Her best chance at escape would be to stop Zara once and for all—but how can she do that from DeMyse, where the Grims seem mysteriously oblivious to Zara’s killing spree?

Review:
I absolutely loved Croak by Gina Damico, and I couldn’t wait to get my hands on this sequel. Apparently I’m a little late with the times though because I think book 3 has been out for a while, and I will now need to get my hands on that one too. I remember loving the humor, the quirkiness, and the unique writing style, which put it to say, is quite unique with paranormal YA.

And thank goodness, all the quirky charm remained in this sequel. Since it had been so long since I read the first one, it took me a little while to get back into the story and remember all the details of how the first book finished. It might have been a good idea for me to have picked up book 1 for a little bit of re-reading first. But when the story did finally all come back to me, I felt so dumb for having forgotten such colossal things (like the death of a certain family member!)

Any way, I think I actually liked book 2 more. It had a lot more action, mystery, and struggles for the main characters. I loved the first book, but as is the case with a lot of first books, so much of it was the introduction to this strange world. Now that the readers know things about the world, a lot more of this book 2 was about the plot than the first one was. However, the world-building never ceases. There’s new towns, new lore about scythes and grim abilities, and then of course there are all the bad places we didn’t get to see in the first book (like the dungeons and grim versions of nightclubs).

There’s new characters who I grew to love just as much as the old ones. Everyone in this book is flawed somehow and this makes them that much more believable. The sarcasm is at an all time high. But, also this book was a lot darker than the first. There’s more death and murder. But there’s also explosions, power struggles, torture, and sacrifice. I think what I loved the most about this book was that despite how dark things got, the characters stayed true to themselves, and the humor never disappeared.

More comes into play with family and relationships. And I like that the main character in this series is just as much into thinking about things like sex as the guy is. And I like that their relationship is awkward and real, and not completely romanticized like it easily could have been. I found all the grim relationships and friendships to be so interesting, and I can’t wait to read more about them in the next book.

The one thing that I didn’t like was the book’s jumpiness. Sometimes, there’d be these colossal 180 scene changes mid-chapter with no indication that anything changes, and I’d be confused and have to go back and re-read, thinking I skipped pages. This was annoying in all the cases where fun things were skipped for other scenes with completely different characters (sometimes a day later). I just wanted to see everything. No skipping please.

It is just so nice to get a different kind of supernatural story that doesn’t succumb to a million YA supernatural clichés. The humor and the flawed characters give this book a nice edge too. There’s some confusing scene jumping, but the awesome plot line and crazy suspense more than makes up for it. I give this a 10/10.
Posted by Nori at 7:00 AM