Across a Star-swept Sea by Diana Peterfreund 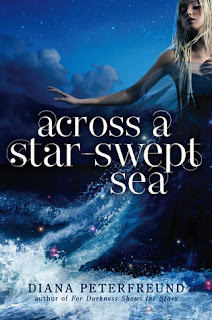 Summary (from Goodreads):
Centuries after wars nearly destroyed civilization, the two islands of New Pacifica stand alone, a terraformed paradise where even the Reduction—the devastating brain disorder that sparked the wars—is a distant memory. Yet on the isle of Galatea, an uprising against the ruling aristocrats has turned deadly. The revolutionaries’ weapon is a drug that damages their enemies’ brains, and the only hope is rescue by a mysterious spy known as the Wild Poppy.

On the neighboring island of Albion, no one suspects that the Wild Poppy is actually famously frivolous aristocrat Persis Blake. The teenager uses her shallow, socialite trappings to hide her true purpose: her gossipy flutternotes are encrypted plans, her pampered sea mink is genetically engineered for spying, and her well-publicized new romance with handsome Galatean medic Justen Helo… is her most dangerous mission ever.

Though Persis is falling for Justen, she can’t risk showing him her true self, especially once she learns he’s hiding far more than simply his disenchantment with his country’s revolution and his undeniable attraction to the silly socialite he’s pretending to love. His darkest secret could plunge both islands into a new dark age, and Persis realizes that when it comes to Justen Helo, she’s not only risking her heart, she’s risking the world she’s sworn to protect.

In this thrilling adventure inspired by The Scarlet Pimpernel, Diana Peterfreund creates an exquisitely rendered world where nothing is as it seems and two teens with very different pasts fight for a future only they dare to imagine.
Review:
I have been a fan of this author ever since her killer unicorn days. I’ve gotten to the point now where I will buy any book with her name on it. For Darkness Shows the Stars was one of my favorite books of 2012. It’s not always easy to sell me on an Austen retelling, and Peterfreund more than sold me. She got me to re-read Persuasion and then even to re-read her book again. To say I was looking forward to this companion novel is an understatement.
I wish I were as familiar with The Scarlet Pimpernel as I was with Persuasion. Unfortunately, I’ve never read this classic. I do remember seeing the movie in my A.P European History class in high school, years ago. I don’t remember too much even about the movie, besides that it was full of spy missions, extravagance, romance, and the French Revolution.
And like how the French Revolution was all about the separation in the classes, so is the start of a war of sorts in this book. This book takes place on a whole other side of the world to the book in the series. And in this part of the world the reduction has long been a piece of the past, that is until a certain character is able to aid the revolutionaries by creating a pink pill, which when taken can cause any human being to loose their senses, and become “reduced.”
And this new reduction is worse. Not only is it used as a weapon, but it brings people to a state submissive dumbness that can’t always be cured. It can permanently destroy brains. The revolutionaries are people that used to be lorded over by the aristos. They seem to be using every opportunity they have to use the pills on the prior upper class.
Persis, the main character (aka: the Wild Poppy) goes on routine spy missions to rescue aristos from permanent brain damage. And her best friend, the queen, is doing all she can to prevent an all-out war. Between the dangerous spy missions she goes on risking her brain, the faked disguises, the ill family member, the protection of her people, and the all the lies Persis is anything but boring. She is one intelligent, brave, remarkable character.
Besides her characters, what Peterfreund really nails in this novel, is her writing style. She writes in the style of the story: slightly over-the top, definitely extravagantly, and somewhat humorously, despite the tough issues covered. There’s plenty of talk of fancy parties and wardrobe choices. There’s also a lot of witty humor.  And I love that this author can get this all across, while simultaneously covering the real issues: class division, war, torture, gender equality, and strategy.
This book came off as a little lighter than the first one, but by all means I think this was intentional. It was the style of the original (or at least form what I remember of the movie). And Peterfruend masters this style with finesse. However, I didn’t like it as much as the first book in this universe.
Mostly, it just felt too long. There was a little too much repetition for my taste. I felt like every aside that Justen had was the same. How many times did I have read about how confused he was about Persis. I got it. You like her even though she comes off as shallow. I don’t need to hear it 20+ times. And likewise I thought a lot of the dilemmas Persis kept thinking about were also on repeat. We probably could have cut this down 100 pages by getting rid of the repetition.
I also kind of wanted to see more spy missions. A lot of the focus was at home for Peris, and a lot of focus was on the “pretend” relationship. I kind of loved the “pretend” relationship and how it developed. And I kind of loved the parties and the playacting. However, again, I felt like it was a lot of the same stuff repeated over and over. Persis acts stupid on a boat, she acts stupid in a house, in a palace, in a party, and all the time she wishes she could be her normal self for Justen (when she doesn’t think he’s the bad guy). It was a lot of the same story but in different locations on the island. And I would have loved to have seen more stuff with Justen’s sister, or even with the visitors at the end. I would have liked to have seen more stuff off the island.
All in all, the writing style defined this book. Peterfreund has a unique, amazing voice that comes across differently and amazingly in everything she writes. I love her characters. And I loved the idea of this retelling. I did think the book could have been cut down a lot. There was a little too much repetition for me, and not enough action. The ending was fabulous and shock-full of action, and I kind wish the whole book read like the beginning and the ending. I did still love the book. It gets an 8/10.
Posted by Nori at 7:00 AM