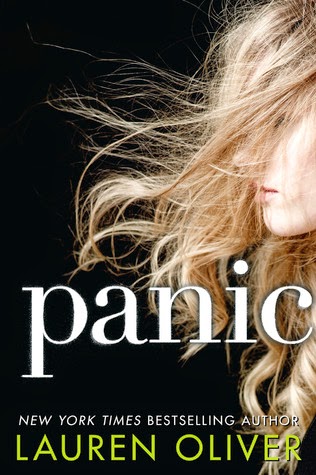 Summary (from Goodreads):
Panic began as so many things do in Carp, a dead-end town of 12,000 people in the middle of nowhere: because it was summer, and there was nothing else to do.

Heather never thought she would compete in Panic, a legendary game played by graduating seniors, where the stakes are high and the payoff is even higher. She’d never thought of herself as fearless, the kind of person who would fight to stand out. But when she finds something, and someone, to fight for, she will discover that she is braver than she ever thought.

Dodge has never been afraid of Panic. His secret will fuel him, and get him all the way through the game, he’s sure of it. But what he doesn't know is that he’s not the only one with a secret. Everyone has something to play for.

For Heather and Dodge, the game will bring new alliances, unexpected revelations, and the possibility of first love for each of them—and the knowledge that sometimes the very things we fear are those we need the most.
Review:
This was another book that wasn’t exactly what I was expecting. I knew I’d be sucked right into Oliver’s writing. And I was. I guess I was picturing Panic to be more digital…I don’t know why. Nothing said that the game wouldn’t be as it was.
I read the book in one day. It was super suspenseful. It kind of read like a YA version of Fear Factor. The game, Panic, was sort of like the ultimate game of truth or dare, minus the truth aspect. And the teens participating had to do seriously dangerous, and scary things like break into the house of the known town drunk who shoots anyone and anything that happens upon his property. There’s guns, high heights, speeding cars, fires, and so many other adrenaline powered activities the teens have to do to stay in the running for the big cash prize. Not all the teen survive.
I found each scene that involved the game Panic to be nail-bitingly suspenseful. I had to know who would go on. I liked that the four main characters were all so different, though I kind of wished they weren’t all quite so screwed up. Dodge has a permanently injured sister, who’s in a wheelchair because of Panic. Heather has an addict mother and a little sister that depends upon her. Nat thinks she has to sell herself to become an actress. And Bishop has some mighty guilt for some seriously crazy stuff on his shoulders.
I like that this book has so many facets to it. It goes from Fear Factor to some serious topics. The book deals with teen homelessness, break-ups, drinking, and revenge. And each character brings their own elements to the story and the game. Sometimes it was hard to cheer one particular character on because I felt for them all –particularly Heather and Dodge.
I’m not quire sure I bought the whole everyone adding a dollar a day to the pot thing. Seriously, some of these characters were way under the poverty line. How were they adding a dollar a day to the Panic pot? Also, Heather and Bishop’s relationship kind of confused me. What happened Freshman year that was never addressed? And why did it take them so long? And why couldn’t Heather figure out something about Bishop that Dodge (the newest friend of the group) could?
All in all, the suspense in this one was killer. The characters were interesting. And I liked how each character brought something different to the overall game and story. I don’t think everything added up for me though. And I kind of wish there was more resolution for a certain main character’s actions. I give it an 8/10. And I’m looking forward to reading more of what Lauren Oliver has to say.
Posted by Nori at 7:00 AM