The Conspiracy of Us by Maggie Hall 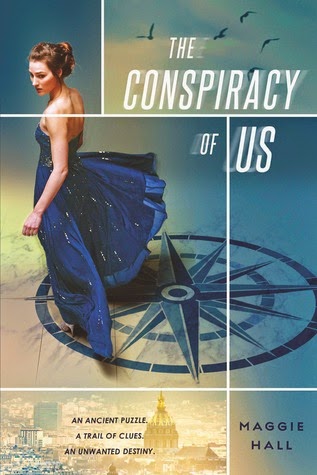 Summary (from Goodreads):
A fast-paced international escapade, laced with adrenaline, glamour, and romance--perfect for fans of Ally Carter

Avery West's newfound family can shut down Prada when they want to shop in peace, and can just as easily order a bombing when they want to start a war. Part of a powerful and dangerous secret society called the Circle, they believe Avery is the key to an ancient prophecy. Some want to use her as a pawn. Some want her dead.

To unravel the mystery putting her life in danger, Avery must follow a trail of clues from the monuments of Paris to the back alleys of Istanbul with two boys who work for the Circle—beautiful, volatile Stellan and mysterious, magnetic Jack. But as the clues expose a stunning conspiracy that might plunge the world into World War 3, she discovers that both boys are hiding secrets of their own. Now she will have to choose not only between freedom and family--but between the boy who might help her save the world, and the one she's falling in love with.
Review:
This was another crazy, fast read. It was super suspenseful and action packed. There’s been talk of it being a bit like a YA version of the Da Vinci Code. And well, I was all over that.
It did have even less believability for me than the Da Vinci Code. There were just too many circumstances in which a couple of teens were able to solve ridiculously hard clues, in a much faster amount of time than the adults who have been trying to figure the clues out for decades. I’m not sure I was buying that. There was also a bit more of the supernatural involved in this one. The mandate that sort of was the basis of the whole secret group was a bit like a prophecy. Also, the whole purple eye thing just didn’t make sense to me scientifically.
But, part of this book’s charm was it’s ability to get you to suspend your disbelief and forget about the loopholes that didn’t make sense. There was a nice, slow building romance. And plenty of international travel. Most of the book took place in Paris, but a nice little portion also took place in Istanbul. Have you ever read a YA book to take place there? There’s kidnappings, murders, threats, black mail, centuries old mysteries, prophecies, family secrets, and an evil organization called the Order, which has no qualms against attacking teenagers or even apparently babies.
There’s also masked balls, prom, slow-building romance, night clubs, private jets, and motor cycle rides. The description makes it look like this will be another love triangle, but it’s not. Though, I must admit there was a little more focus on romance then I was expecting. And maybe a little more focus on fashion then I was expecting too.  But, this just added to the crazy, unbelievable-ness and fun of the whole thing.
Avery was a bit too naïve for my liking. She wasn’t as scared by a boy having a photograph of her (that only he could have taken by spying) as I think she should have been. Also, she was totally willing to go to Paris with a stranger. Though, I guess, she learned to be a bit more guarded as the book continued. She learned to not tell everyone her secrets, or let others know her eye color. I guess I can tolerate a naïve character who learns and grows throughout the story.
All in all, I couldn’t put this down. The mystery and suspense were spot on. I didn’t like the main character so much at first, but she grew on me by the end. The romance was fun and slow-building. And while there were definite moments of crazy un-believability, for the most part this didn’t get in the way of the suspense, and I still really enjoyed reading this one. It gets an 8/10.
Posted by Nori at 7:00 AM