Hold me Closer: The Tiny Cooper story by David Levithan 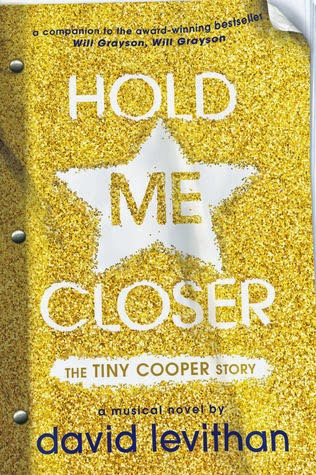 Summary (from Goodreads):
It’s Tiny Cooper’s turn in the spotlight in this companion novel to New York Times bestseller Will Grayson, Will Grayson.

Jazz hands at the ready! Tiny Cooper (“the world’s largest person who is also really, really gay”) stole readers’ hearts when he was introduced to the world in the New York Times bestselling book Will Grayson, Will Grayson, co-authored by John Green and David Levithan. Now Tiny finally gets to tell his story—from his fabulous birth and childhood to his quest for true love and his infamous parade of ex-boyfriends—the way he always intended: as a musical! Filled with honesty, humor, and “big, lively, belty” musical numbers, the novel is told through the full script of the musical first introduced in Will Grayson, Will Grayson.
Review:
So, it’s been a long time since I read Will Grayson, Will Grayson. However, it’s up there on my list of top best YA books of all time. I recommend it to people at my library all the time. It’s my favorite John Green book (next to The Fault in Our Stars), and I seriously need to re-read it now. There’s a lot of things I don’t remember about the book. Tiny Cooper though, was a character I definitely remembered. How can you not remember this amazing person? I didn’t remember much about the musical he was working on in Will Grayson, Will Grayson, but that’s okay because this is it.
And wow. I was expecting over the top humor. I was expecting fantastic songs. I was expecting to laugh. And I did. I got all these things. What I was not expecting was to feel so much in this book, and I had all the feels. I laughed out loud one moment, I sang along another, and then there were moments when I had tears in my eyes. And I loved every mixed bag of emotions moment of this book.
This musical is smart, snarky, hilarious, and so brave. I both can and can’t imagine anyone being brave enough to write this, and then star in it. Tiny is one amazing human being (aka: character). The first half was over the top humor about being gay from birth to coming out to his parents, to having a super cool lesbian babysitter. And the second half was a little more serious. There were scenes about body image, about sex, and about pain. Tiny has a parade of ex-boyfriends and you just can’t forget about the ghost of Oscar Wilde.
A lot of it made me laugh, but I’m actually finding the more emotional moments to the be the most memorable, like these words from one of the songs toward the end: “I’ll be your weekend, / your fire escape, / the dream you never leave – / I’ll be your day off / your stopped clock / your glorious reprieve.  /  Let me be your something else. / Let me put your past up on a shelf. / Let me unfold you from your problems / and let you be yourself” (182).
It’s written as a play, with notes written in by Tiny. So, it goes super fast. There’s never a good moment to stop reading. You will want to read it all in one go. I think what I love the most about Tiny is that despite all of his over the top actions and songs, there’s something about him that is just like everyone else. Everyone wants love. Everyone wants what he wants.  There just aren’t that many people who go about it so honestly, hopefully, and sweetly. I loved this book. It’s one of my favorites of the year so far. It so gets a 10/10.
Posted by Nori at 7:00 AM