So I've kind of mentioned my journey to New Orleans to the ALA (American Library Association) annual conference several times....It is mostly because of my love for books that I was so excited. I got to network. And I also got to meet some amazing librarians. There really is nothing like riding on a bus entirely filled with librarians. I'm also pretty sure that my entire flight from Chicago to New Orleans was librarians, and at least the majority of my flight back, too. I really loved talking with the librarian I met from the Library of Congress, on my shuttle to the airport. I also loved talking with all the Children’s/YA librarians I met in line at author signings.
But, to the books: I brought home over 40 new books. I got a lot of Advanced Reader’s Copies (ARC’s), and I got a lot of books signed. I really don’t want to list all the books I got, but here are several ARC’s that I am insanely excited about reading: Forever by Maggie Stiefvater (which I have signed, and am half way through at the moment), Scorpio Races by Maggie Stiefvater (a new series/ also signed), Legend by Marie Lu, The Future of Us by Jay Asher and Carolyn Mackler (signed), The Name of the Star by Maureen Johnson (signed), The Girl of Fire and Thorns by Rae Carson, Dark Parties by Sara Grant, After Obsession by Carrie Jones and Steven E. Wedel, Shatter Me by Tahereh Mafi, and Daughter of Smoke and Bone by Laini Taylor.
I went to a paid event called the Young Adult Author Coffee Klatch, which was amazing! I bought tickets to it at the same time I bought my ticket to the conference. The event involved a sort of speed-dating atmosphere, where a YA author would come to your table, and when a bell was rung, the author would leave and a new one would take his/her place. There were a ton of authors there, as you can see by this photo…Can you spot any ones you know? 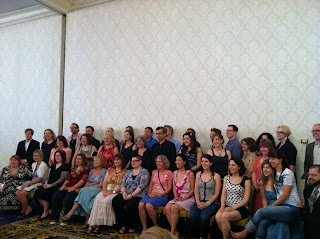 The authors who came to my table were: Donna Jo Napoli, Medeia Sharif, Cheryl Rainfield, Jim Citvanni, Chris Grabenstein, Paul Volponi, Cynthia Liu, Jay Asher, and Carolyn Mackler. It was great meeting authors I knew, but also kind of awesome meeting new authors, and already being able to place faces to books. It was also nice just talking with them. There were no signings or photos taken, just chatting. I only wish I could meet more. That event could have been two hours, instead of one, and I would have not been anywhere close to bored.
I got books signed by Cassandra Clare, Alex Flinn, Maggie Stiefvater, Sara Dessen, David Levithan, Lucy Christopher, Colleen Houck, Maureen Johnson, Jay Asher, Carolyn Mackler, and probably more. Here are some signing pictures:
My last day at the conference (Monday morning), I remember walking around the stacks with my friend Jordan, and then just pausing midway between a conversation. She was like “What is it?” I realized, and then said at the same time, “I am about 2 feet away from Walter Dean Myers!”  I didn’t go to his signing –the line was too long and I had to leave for the airport soon, but still, it was cool just being by him. I also walked by Jack Gantos doing a signing and Paulo Bacigalupi. I didn’t get in line for them either because I didn’t want to buy books I already owned, just for an autograph. But I walked past them in awe. And during my first day there, I caught a bunch of authors I’ve already mentioned, hanging out together…They even noticed me taking their picture, and asked if they could take mine too. Here are those awesome photos!
And while I can talk about the books, the authors, and my experiences forever, I am coming to an end here. Expect a lot of book reviews soon! And also, just so we are clear, all the pictures I have posted, I got permission for. I asked all of the authors if it was okay to post my pictures on my blog and they told me it was. I have a few more pictures I’m not posting because I did not get the chance to ask those authors if it was okay.

If you want to see the reverse side of the last picture, please check out Jay Asher's blog: http://jayasher.blogspot.com/
Posted by Nori at 9:52 AM