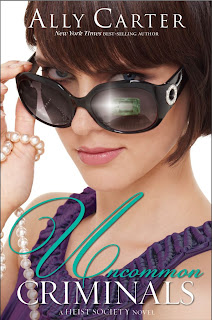 This was a book I pre-ordered. It’s book 2 in the Heist Society series. I probably only read book 1 about a week or two before I started my blog. I grabbed the first book at a Borders closing sale, and it sat waiting to be read for a while. Little did I know that I was making the James Bond of YA books wait a while.
Picture James Bond mixed with Ocean’s 11 mixed with the Weasley family in Harry potter mixed with Cassandra Clare’s teen drama and you have book 1 in Carter’s series. I know that is a lot of mixing. But, I really cannot describe it any better. Book one was about Kat Bishop trying to escape her thieving family. To escape the morally lacking uncles and cousins, she signs up for a fancy private school. And maybe a chapter or two into the book, she is broken out by her amazing thieving friends. But “thief” doesn’t seem to be an adequate enough term to describe Kat and her unique family. For starters, the majority of book 1 is about Kat and her teen crew robbing the most secure museum in the world: The Henley, of four masterpieces.
This book (2) begins not too long after book 1 finishes. Kat has apparently been on a robbing binge, doing dangerous missions all on her own, though her missions are all about helping people and not about gaining a profit. She was doing things like tracking down paintings that the KGB once stole, and putting them in more deserving hands. As she gets back from one such mission alone, Kat is stopped by a woman claiming to recognize her as the Katarina who robbed the Henley, and from there another impossible sounding mission begins. Things happen really quickly, and it almost seems too easy for Kat and her crew (that she finally takes along with her again) when they manage to steal the famous, “cursed” Cleopatra Emerald. After Kat and her friends get the emerald to who they believe its rightful owner to be, they all come to realize they have been conned. And the rest of the book is about getting the gem back.
Between breaking into Interpol headquarters in Lyons, France, spending nights on a private yacht along the shores of Monaco, planning a heist in the famous Monte Carlo casino, stealing gems and replacing them at famous auction houses in New York City, it’s a wonder that Carter had any room for character development, but she did. There were some fun, not as main characters in the crew, I could have gotten to know more, but all in all, I loved all of these kids. Did I mention that Kat is only 15? And between all the stakeouts, I found myself crossing my fingers and hoping for some romance to finally play out between Kat and her best friend, Hale. Hale was not born into the family, but has been tagging along for some years now. And Hale is loaded, providing the private yachts, the hotel fees, the costume changes, etc. It is my opinion that it has taken Kat far too long to realize just how perfect Hale actually is, but whatever, she’s 15 and I guess she still has some time. And this little bit of romance, really seals the deal for me in making me want book 3 as soon as possible. I need to know how it plays out between these two.
There is no magic (like with the Weasley’s) or insane stunts (like with Bond), but there is so much plot, and double crossing, and twists and turns! The awesome family element, the romance, and the great characters, just make what could be an amazing spy novel for anyone, an amazing YA spy novel. And it’s loaded with another thing I love: kid power. All these things are done without that much help from the uncles or fathers, or mothers, or aunts. Actually most is done behind their backs. And so much of this book is about these kids proving themselves. And never once did I doubt them, especially Kat and Hale.
And yes, it is a little hard to believe. But so are the James Bond movies, I mean really. But, that’s kind of what makes it so much fun. That and all the heist lingo, that is. There’s a name for everything from “ the Cinderella” to the “Catherine the Great.” And reading about all their ideas (like releasing hundreds of doves into a casino to find any other ways out) and their costumes (like security personnel) was such a blast. I give this book a 9/10.
Posted by Nori at 1:00 PM