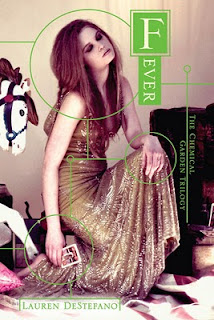 So, I may have gotten this book the day it came out. And I may have gone to work that day and shrieked (quietly) to finally see this one and just how pretty it looked. It was my plan to read this one and another dystopia sequel I picked up after I had finished all of my galleys that came out in March, but so many books come out in March! So, I allowed myself a little break from galleys for this one and another one I’m doing a book club discussion on tonight at my volunteer library.
I’m so glad I broke my rules and read this one! I read it in one sunny afternoon yesterday. I took it outside to the 80 degree March weather Chicago has been having, and sat by the lake for one fantastic sequel! Be warned that I am about to spoil some things if you have not read book one (which was one of my top ten books from 2011).
It begins immediately after book one finished. Rhine and Gabriel just emerge from the water they used to escape the mansion and are almost immediately bombarded with more depression and harsh circumstances. They get captured outside this sort of red light district carnival. Rhines’ looks (or more importantly her eyes) save her again from immediate danger. The madame in charge of the circus explains that she sells love and the illusion of love, and needs Rhine to be part of that illusion. She dresses her and Gabriel up to put on a “show” of sorts for an audience.
Rhine is the only girl in the carnival that isn’t making money for the madame by having sex. She is almost sold to one wealthy client, but then things get really crazy. Madame almost kills a well loved (yet deformed) child, Maddie. And Rhine and Gabriel are finally capable of making an escape (Maddie in tow).  They make their way to New York, both recovering from what happened at the carnival. Gabriel had be been forcefully medicated a drug that he is now having withdrawal symptoms for. And Rhine is losing a lot of the determination she had in book 1 as she discovers just how bad the world is everywhere when you are a woman.
The three find Rhine’s old destroyed house. They find some clues they need to put together. And end up finding Maddie’s grandmother by following an address they have in a picture book that Maddie carries. Rhine and Gabriel’s relationship grows. Yet, it’s also clear she kind of misses her jerky husband. Her father-in-law, the creepy bad guy from book one who kills babies, experiments on women, and lies to his son is on the search for Rhine and always seems to know where she is. And Rhine slowly becomes sicker and sicker, even though it’s not time for her die to quite yet. (Women live to 20 and men to 25).
There’s drugs, prostitution, captures, escapes, journeys, reunions, good people, bad people, a general lack of hope, experiments, forced medication, forced experiments and surgeries, love, and hate. Only thing scarier than a sex circus is probably being kidnapped and then experimented on (painfully) against your will. At first, I didn’t think I would enjoy this book as much as the first one. The book description makes it sound like the whole book takes place at the carnival, when in actuality about 1/3 of it takes place there. And the carnival scenes were definitely terrifying. I kept dreading what would happen to Rhine there. But, my favorite parts of the book all took place later.
I loved learning about Maddie’s family. I loved the new characters. I loved the romance with Gabriel and how so much of it was stemming from this intense friendship. I loved Maddie, and felt so bad for her mother. I think these books are so good because nothing is easy and this makes it so much more real. Rhine’s brother wasn’t sitting at home waiting for her to come back. She has to go look for him and work hard for everything she wants. And with each obstacle, Rhine continues to do what she thinks she needs to, helping as many girls along the way as she can.
I was really impressed that this book continued to draw me in as much as it did. Rhine was definitely less hopeful in this one and I guess this makes sense, though it was so hard to see her so broken. It reminded me somewhat of the Post Traumatic Stress version of Katniss in Mockingjay. It also didn’t help that Rhine was drugged for what seemed like most of the book. She was surrounded by fumes and drugs at the circus. And then later she was drugged by her father-in-law. And when she wasn’t drugged, she was sick. She really had no luck in this novel. Yet, despite all the unconsciousness and lack of full mental capabilities, Rhine continued to be a character I couldn’t help but want to succeed.
Like all dystopia sequels, there is a bit of a cliffhanger ending. And I know book three is promising to have a lot more politics, violence, and discoveries in respect to the disease that everyone has. I can’t wait for it! I loved this one (even though it was a bit slower than the first one). I highly recommend this series to fans of dystopia. They can be a little intense though (more intense than others), so don’t jump into it lightly. I give it a 10/10.
Posted by Nori at 11:41 AM