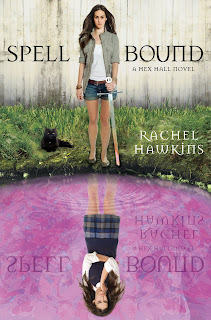 I have had a ball reading this series! I’m not sure if this is meant to be the last book in this series or not. It did have a bit of a finality to it. I would continue to keep reading them if the author so chooses to write more. No question about that!
I set some strict guidelines for myself about reading all my galleys in time. And I’ve already broken my own rules. It’s just that so many awesome books just came out and are going to come out for the next couple of months that I have no idea how I can keep up with my Net Galley deadlines.
But, to the book (beware of spoilers from the first two in the series)! Book two ended with Sophie escaping a burning down Hex Hall for the enemy territory that her mother was said to be at.  When Sophie reunites with her mother in this book, she realizes some very important things. 1) What she thought was a quick magical transport to her mother actually involved her being stuck in limbo for a couple of weeks without knowing it. 2) she has no idea if her father, her vampire best friend, her boyfriend, or her betrothed are safe because they did not all manage to escape together. 3) Her father’s interesting demony past only makes up for half of Sophie’s strange heritage; her mother has an interesting back story too, one that involves hunting demons and prodigim (aka: vampires, shapeshifters, fairies, and witches). And 4) She still most definitely has no use of her awesome demon magic powers; however, she can now use magic when her ex-enemy’s ghost inhabits her body and uses her own powers…
We get to meet cousins/family members on the human/demon-hunting side of the family, and I found them fascinating! They’re a group of strong women who have been training their whole lives to protect people from evil.  How awesome is that? Eventually, we learn that the bad guys from the earlier books have been exaggerating a lot in effort to make their cause seem better. And when Sophie and all her friends are magically forced back to Hex Hall as part of a seriously evil demon experiment where kids are forced into becoming soldier demons, it soon becomes clear that it’s up to Sophie to save the day.
This book has everything! Love triangles, talking mirrors, warrior women, ghosts, family drama, torture, magic, kids who need to be saved, journeys into hell (literally –and this was so cool!), and some serious decision making for Sophie! There’s also an interesting prophecy, some juicy romance, some sacrifice, wonderful friendship moments, and just frankly, all sorts of awesome!
I’m pretty sure I’ve said this about the first two books already, but my absolute favorite thing about all this awesomeness is Sophie! She’s just so funny and brave and one of my favorite YA heroines! The dialogue between the friends, the relationships between all the characters, and everyone’s eventual combined goal (to save all the kids from turning into scary, magical demon monster soldiers) was just plain amazing.
The kids go into hell at one point to maintain demonglass for the upcoming battle. And I just had to share this bit of dialogue that actually made me laugh out loud while reading:

“So…is this it?” Jenna asked. “Are we in the Underworld? Because to be honest, I thought it would be hotter.”
I looked around in the gloom. “I…don’t know,” I finally said. “Anyone see a sign that says, Underworld This Way? Preferably with an arrow?” (pg 272).
I just love Sophie and Archer’s sense of humor and overall relationship. I also love the best friend: Jenna. Though, I was hoping she’d have more happier relationship times with her girlfriend than she got. Yes, she’s a somewhat of an outcast vampire (obsessed with the color pink), and also she’s dating a girl. And without her, a lot of important decisions would never be made! I also loved the whole ghost taking over Sophie’s body thing. The fact that the girl used to date Sophie’s boyfriend made the love triangle thing even more complicated, and it was just so much fun to read!
I give this one a 10/10. And I do hope that Hawkins continues to write more, if not in this series, than at least with a new one.
Posted by Nori at 5:25 PM