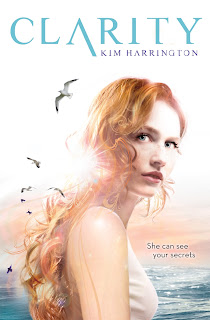 So, all my favorite bloggers/reviewers loved this one. And because I work in a bookstore, I found out when it would be in paperback, and decided to wait till then to buy it. Well, it’s in paper back now, but once I finished it I knew I would need the sequel (even though that won’t be in paperback for a long time). I’m already into book 2…And I just found this book to be so much fun.
There was nothing too new or shocking about the story, but it was just so well put together. It’s about Clarity or Clare and her ability to touch an object and see, hear, and feel the emotions someone was feeling in the past while touching that same object. What is different here is that this ability isn’t something Clare just comes into all of a sudden and has to hide from everyone. Her whole family has “abilities” of some kind and they make money by doing readings for the tourists who come to their Cape Cod town. The whole town knows what she can do. And she is rather ostracized for it, but at least she’s not hiding.
It’s just not in Clare to hide. She’s the kind of girl who dumps a cup of soda on another girl’s head when she’s being picked on. She’s also the kind of girl to volunteer to help solve a murder in her town, even when it involves working for an ex-boyfriend she’s trying to get over. When a tourist is found dead and evidence is scarce, the town puts Clare (and her ability) along with a private detective and his son on the case.
There’s a love triangle between Clare, the ex-boyfriend, and the detective’s son. There’s a lot of dark humor about family and psychics and competition. There’s the teens that are being murdered off. Oh, and Clare keeps getting more and more evidence that her brother might be involved in the murder of the first girl, but she just can’t see him murdering anyone. There’s talking to ghosts, mind reading, sensing the past from objects, possible future-reading, parties, murder investigations, steamy kisses, and just the right amount of suspense.
What really made the book so good though was Clare. She was so sarcastic and strong. I loved how she stood up for herself and her family. She wouldn’t let anyone put her down, especially those who believed her to be fake. There’s some healthy competition between Clare’s family and a new psychic in town. And I found that made everything so entertaining. The relationships Clare had with her brother, her ex-boyfriend, and the people around town just felt so real and believable. And she had just the right amount of loneliness and need to be accepted to make her authentic!
I look forward to more books by this author, and I am already enjoying the sequel. I’ll let you know what I think of it soon! It gets a 9/10 from me.
Posted by Nori at 9:43 PM