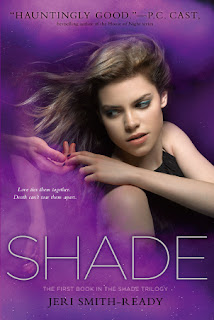 I got this one for free at the Romantic Times Booklovers Convention. I think I actually traded another girl for it. Some of the books I got were ones I already owned, and trading with teen girls for random titles was actually so much fun! I wanted this one because a coworker of mine highly recommended it to me. Thanks, Anna! I loved it. And I’m so glad I don’t have to wait for the next one because both Shift, and Shine are already out, and I have a feeling I will need to get my hands on them soon.
It’s about Aura. She lives in a world where people born after a certain time can see ghosts. Literally, all the young people in this book can see the dead walking around them, but all of the adults can’t.  The book begins on Aura’s boyfriend’s birthday. Logan (aka: boyfriend) does something stupid. He combines drugs and alcohol in effort to have sex with Aura. They’ve kept postponing this night, and finally when it’s going to happen, Logan is too drunk, so he decides to take some drugs that were given to him by a record company that wants to sign his band.
Aura knows when he’s dead because, well, she sees his ghost. And what most people don’t know is that Aura was the first person born to see ghosts. She actually started what everyone calls the shift. And while her whole life has been about trying to ignore the pleas of the dead (wearing red helps turn them away), she now all of a sudden can’t imagine ever wearing red again. She doesn’t really have to grieve and move on from a boyfriend that’s still haunting her, does she?
Well, enter boy number 2 in the triangle: Zachary (aka: the last person born not able to see ghosts). He and Aura have the same birthday, born only seconds apart. And while Aura is learning how hard it is to have a relationship with a dead guy because no touching is possible, her relationship with Zachary is building. He’s new to the school, but so quick to defend Aura to all the jerkfaces that start rumors about her involvement in her boyfriend’s death.  And Zachary is helping Aura with her thesis about ancient astronomy and megaliths. She didn’t want help on it because she was sure that what was she was studying would help lead her to some answers about the shift.
Zachary helps her anyway. And some of my favorite scenes involve the two of them studying the stars! Any way, soon it becomes clear that Zachary is really special. And the two are confiding a lot to each other about who they really are. Aura learns that she’s been watched for a large part of her life because she was the first one to turn. There’s escape scenes, parties, rumors, ghosts, ghost repelling, love triangles, and a lot of awesome and creepy world building! There’s even a little bit of Edgar Allen Poe thrown in the mix.
I loved Aura! She is just so much tougher than she thinks she is. I was so embarrassed for her in the court scene. Logan’s parents were suing the record company for giving their son the drugs that killed him. And Aura had to step up in front of everyone and talk about her sex life (or lack of one). But, while she was terrified, she handled it all so bravely. I loved her relationship with Logan’s family. And I loved how she seriously thought out all of her dicusisons, everything from replacing red sheets to which boy she thought she should be with.
I also loved the world! It was so creepy. I want answers to it as much as Aura does! What does everything have to do with her mother???? I loved the romance, especially all the tension between her and Zachary! And I loved that it wasn’t clear which boy loved her more. They both were so willing to sacrifice themselves for her and help her with whatever she needed.
The one thing I didn’t like was how unbelievable some of the stuff was. Aura forgave Zachary super fast. She also just accepted that she was important super fast. And then she and Zachary just accepted the short answers from his father and her aunt…super fast. These characters don’t accept anything. Why didn’t they question their guardians more? And also, some things weren’t really described adequately enough for me. Like what are shades exactly? Why does Aura seem to see more of them than anyone else? Maybe this will be dealt with in the next two books. I know I will definitely be reading the next two books, needing some answers!
I give this one a 9/10. I really enjoyed reading it. And frankly I don’t know why I never read these books before!
Posted by Nori at 9:29 AM