Being Sloane Jacobs by Lauren Morrill 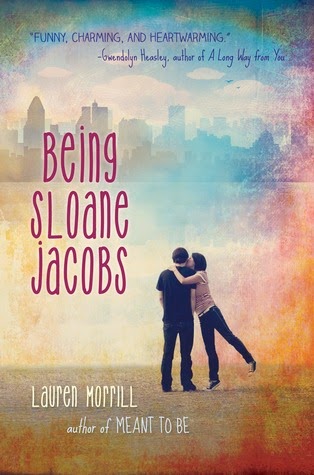 Summary (from Goodreads):
Meet Sloane Emily Jacobs: a seriously stressed-out figure-skater from Washington, D.C., who choked during junior nationals and isn’t sure she’s ready for a comeback. What she does know is that she’d give anything to escape the mass of misery that is her life.

Now meet Sloane Devon Jacobs, a spunky ice hockey player from Philly who’s been suspended from her team for too many aggressive hip checks. Her punishment? Hockey camp, now, when she’s playing the worst she’s ever played. If she messes up? Her life will be over.

When the two Sloanes meet by chance in Montreal and decide to trade places for the summer, each girl thinks she’s the lucky one: no strangers to judge or laugh at Sloane Emily, no scouts expecting Sloane Devon to be a hero. But it didn’t occur to Sloane E. that while avoiding sequins and axels she might meet a hockey hottie—and Sloane D. never expected to run into a familiar (and very good-looking) face from home. It’s not long before the Sloanes discover that convincing people you’re someone else might be more difficult than being yourself.
Review:
I absolutely loved Morrill’s debut: Meant to Be. And as soon as I read the synopsis of this book, I knew I would love it too. I know the whole “switching places” concept has been done before, and I know that it’s a little bit cheesy. Not to mention that it is insanely impossible to think anyone could learn either figure skating or ice hockey in one month’s time. Sometimes though, I want the familiar, the cheesy, and the impossible. And when an author can write these three things well, it validates my need for them even more.
And Morrill definitely writes her contemporaries well. There’s something both endearing and painful about watching a hockey player learn a double axel. And I found myself liking Sloan Devon a lot, right away.  She had no idea how hard figure skating would be. And she worked so hard to make Sloane Emily not look terrible. It took me a little longer to warm up to Sloane Emily. And I feel kind of terrible saying this but I just don’t think she could have survived hockey camp with no bruises and pains. Her experience as a whole seemed a lot easier than the other Sloane’s. And I’m not sure I believed her experience as much.
I’m not a skating expert. In fact, I’m terrible at all kinds of skating. And I guess I can’t judge either character’s ability to learn their sports when I knew going in how impossible it all really was. I just feel like they should have been equally as hard I guess. Also, why was Sloane Devin’s knee injury flaring up in hockey, but not in figure skating? Was her injury necessary? I feel like she had enough going on mentally that the knee thing was just extraneous. And I’m not sure why one sport would be bad for it, and the other not.
I loved the boys! I love that none of Morrill’s characters are perfect, especially the boys. This makes the story more plausible. I’m tired of YA guys being so perfect, and these guys are definitely going through their own problems.
I also liked that it wasn’t all about the sports for the Sloane’s. They were both running away from their problems.  Sloane Emily was running way from her father. And Sloane Devin was running away from the issues she was having with her mother. And I guess what makes the whole story work so well is the idea that everyone needs to escape their lives sometimes. Who wouldn’t want to be another version of them-self for one summer? Too bad I don’t think I’ll ever meet someone with the same first and last name as me.
Between the family drama, the sports, the practicing, the pranks, the fighting, the boys, and the high-stakes pressure at every turn there never really was a dull moment in this book. I read it in one day (and that’s with going on a trip to Boston and spending hours at a museum to boot). It was just as cheesy as I though it would be. However, Morrill writes cheesy well and with enough individuality to make it her own. It’s just what I wanted. I give it a 9/10.
Posted by Nori at 7:00 AM