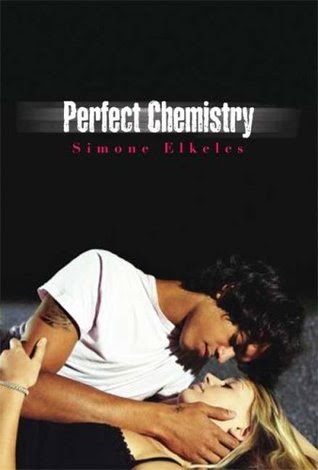 Summary (from Goodreads):
When Brittany Ellis walks into chemistry class on the first day of senior year, she has no clue that her carefully created 'perfect' life is about to unravel before her eyes. She's forced to be lab partners with Alex Fuentes, a gang member from the other side of town, and he is about to threaten everything she's worked so hard for: her flawless reputation, her relationship with her boyfriend, and the secret that her home life is anything but perfect.

Alex is a bad boy and he knows it. So when he makes a bet with his friends to lure Brittany into his life, he thinks nothing of it. But soon Alex realizes Brittany is a real person with real problems, and suddenly the bet he made in arrogance turns into something much more.

In a passionate story about looking beneath the surface, Simone Elkeles breaks through the stereotypes and barriers that threaten to keep Brittany and Alex apart.
Review:
I have heard so many wonderful things about this author. This was my first book by her. I’m not sure why I’m only getting to this book now. Elkeles has been one of those authors I’ve been embarrassed to admit to never having read before. And I love that she deals with YA contemporaries that involve teens of different ethnic backgrounds than the norm.
That being said, I didn’t exactly love it. If I read it as a teenager, I most likely would have eaten it up. There’s a sizzling love story, there’s tons of family drama, there’s a boy from the wrong side of the tracks, there’s violence, there’s sex, there’s drugs, there’s drinking, and there’s a lot of growing up. It was also interesting to read about a main character whose sister has both a physical and mental disability.  In fact, what Brittany was most afraid of was her parents sending her sister away to a home.
I love that Alex and Brittany build a real relationship slowly over time. I love that both characters have enormous eye-opening moments of clarity where they really learn that no one has it easy. I can see why so many teens love this book. Nothing is really sugar coated. I thought the gang stuff would be from the writing style. But, it was definitely there. There’s drug deals and beatings. There’s murder and lots of suffering. I also like that Alex was a real teenage boy, with real teenage boy thoughts (as compared to an extremely romanticized version of a teen boy).
I did think some people got over their prejudices awfully fast. But, maybe it sometimes works that way? I also feel like there is so much I never got to learn about either main characters’ parents. Like what was wrong with Brittany’s mother? And how could Alex’s mother keep so much from him? I liked the side characters and wished I could see more into their lives.
But the real reason I was not in love with the book was the writing style. Sometimes I’d get really annoyed when the author would write something, and imply something else and then re-iterate what she was implying. It made me feel like she wasn’t sure her audience would understand sarcasm. So she’d be sarcastic one second and literal the next, to make sure we go it. I always got it. And then it just felt repetitive.
But more than several moments of repetition was the layout of the whole thing. It read like most other YA contemporaries or even New Adult novels I’ve read. There is the formula. Boy and girl have to learn to work together for the greater good. Boy sees who girl really is. Girl sees who boy really is. Boy makes girl risk things. Girl makes boy risk things. Both try to make each others' lives better. Boy and girl have a falling out. Boy and girl get back together after life-changing decisions/actions are made.
Sometimes I like formulaic stories. But if a book is to work like that, than the writing better be excellent. And this writing just wasn’t. I did get lost in the love story. I did ship the two star-crossed teens. And I did pretty much finish the book in a day; it was rather addicting. I just wish the writing style was as mature as the topics. I give this a 7/10.
Posted by Nori at 7:00 AM