Re-Read 2015: Harry Potter and the Order of the Phoenix by JK Rowling 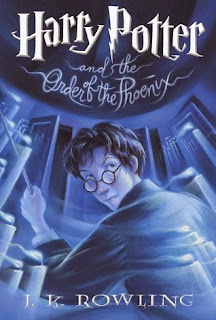 Summary (from Goodreads):
Harry Potter is due to start his fifth year at Hogwarts School of Witchcraft and Wizardry. His best friends Ron and Hermione have been very secretive all summer and he is desperate to get back to school and find out what has been going on. However, what Harry discovers is far more devastating than he could ever have expected...

Suspense, secrets and thrilling action from the pen of J.K. Rowling ensure an electrifying adventure that is impossible to put down.
Review:
So, this is my new least favorite in the series. It’s funny that my favorite has remained the same (book 3), but my least favorite has gone from book 2 to this one (book 5). And I must say right away that even though this is my least favorite, I still 5-starred it on Goodreads. Even the least good in this series is by far superior to most other books out there. Just saying.
It took me a couple of weeks to get through this! Harry is just so whiny/angry/angsty in this novel. I literally finished 3 or so other books in the time it took me to get through this one. And while I knew angst to be a problem in past readings, it’s only really bothered me now. He just kept complaining about Dumbledore not paying him attention, about his best friends not breaking all the rules to fill him in on news over the summer, about the Dursleys, and then about schoolwork, and quidditch, and Umbridge. The complaints never stopped. However, they became much more manageable in the second half of the book when the pure level of action increased tenfold and could distract a re-reader from the whining.
And okay, I may have been purposely postponing getting to a certain point in the end where a certain favorite character of mine dies –giving Harry even more time/reasons to complain. But despite, all this angst, there is so much amazing in this book that I completely forgot about! I forgot about Hagrid’s brother! I forgot about St.Mungo’s and a mini reunion with Professor Lockhart. I forgot about how amazing Dumbledore’s Army was. And of course the best school exit in all literary history: Fred and George’s goodbye to Hogwarts.
There were things I thought I remembered correctly, but loved being re-introduced to and forced into seeing how much more awesome it all is in book format. I thought I remembered how awful Umbridge was. I was wrong. She is way worse in the book than in the movie. I thought I remembered all the crazy amazing moments at the Department of Mysteries. But I was wrong. It was way cooler (again in book format). Why couldn’t the movie have shown all the rooms? Also, why is the longest book (oh yea, this was a monster at 870 pages) the shortest movie? Oh, and all the awkwardness with Cho was a million times more awkward in the book!
Despite all of Harry’s whining, this book still had so many great things going for it. The ending battle at the Ministry between Dumbledore and Voldemort was crazy intense. We finally learn too why Voldemort went after Harry all of those years ago. Also, so much of the O.W.L.S test anxiety was just so spot on for testing time in school. I loved witnessing the magical version of test anxiety. It was worse.
Between Umbridge, mysteries learned about Snape, battles at the ministry, flying across London via thestral, Voldemort mind connecting nightmares, new characters like Luna, Dumbledore’s Army, an amazing exit by my favorite twins, the ever present fear of Voldemort’s return, the test anxiety, the first dates, the sadness, and the anger, there really was just so much going on in this book. And again, there was so much foreshadow of what is to come. I could have used a little less whining, but I still have to give this a 10/10.
Posted by Nori at 7:00 AM