Re-Read 2015: The Last Olympian by Rick Riordan and read by Jesse Bernstein 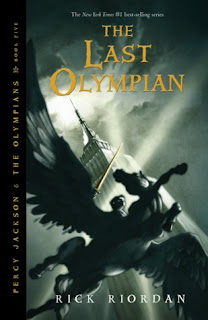 Summary from Goodreads:
All year the half-bloods have been preparing for battle against the Titans, knowing the odds of a victory are grim. Kronos’s army is stronger than ever, and with every god and half-blood he recruits, the evil Titan’s power only grows.

While the Olympians struggle to contain the rampaging monster Typhon, Kronos begins his advance on New York City, where Mount Olympus stands virtually unguarded. Now it’s up to Percy Jackson and an army of young demigods to stop the Lord of Time.

In this momentous final book in the New York Times best-selling series, the long-awaited prophecy surrounding Percy’s sixteenth birthday unfolds. And as the battle for Western civilization rages on the streets of Manhattan, Percy faces a terrifying suspicion that he may be fighting against his own fate.
Review:
I’ve changed my mind. Sorry, book 3. This is my favorite Percy Jackson book. I thought the other ones were hard to put down/stop listening to. This was the worst. It was literally non-stop action. The whole book was one attack by the Titans after another.
On top of the Titans V. Olympians war taking over Manhattan, there is also more trips to the underworld, humongous risks, prophecies being fulfilled, kisses that transpire, meetings with the Gods, the return of all your favorite mythological creature friends, the getting to know the old Luke, prophets, family drama, the worst of all monsters (that take all of the Greek gods to kill), and death.
I was impressed by Percy’s bravery. He went all out to be able help win this war. I was actually blown away by the bravery of all the side characters too.  Clarisse just owned the town with her fighting skills. Grover went all out too. Even Thalia comes back, along with the hunters, and shows off her mad skills. Also, surprising, were Percy’s mother and stepfather. I was blown away by their help. And I can’t forget about how brave Rachel Elizabeth Dare is either.
This is the book all the other ones lead up to. The moment of the prophecy is here. And It so easily could have been a major let-down. It wasn’t. It completely led up to all of my high expectations (both times)!
I remember being annoyed by some of the things it took Percy too long to figure out. Like, seriously, why was the next prophet a surprise? And the overall message of the prophecy wasn’t that confusting. This time reading/listening though, this didn’t bother me so much. Percy was never known for being the smartest or wisest. I liked that he wasn’t good at all things, and had to figure some of the important stuff out as he grew up.
I love the ending of the book too. What a fantastic ending. I kept thinking about what I would do if I were offered what Percy was offered. He clearly made the right decision, and I can’t wait to get into the next series (of which I have only read book 1 in the past…).  These books are fun, fast-paced, hilarious, adventure-filled, sentimental, and just plain good. I can’t believe I never re-read them until now. They combine Greek mythology with all the normal kid/teen stuff I read on a routine basis. Riordan does a fantastic job of mixing modern day NYC with ancient Greece. The characters are believable and fun. And I really can’t say anything bad here right now. This gets a 10/10.
Posted by Nori at 7:00 AM