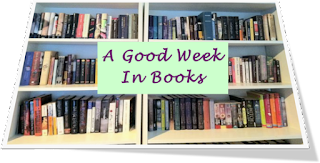 I had an unbelievably amazing week in books. My awesome library director allowed a whole bunch of the staff to pick a day of the Midwinter conference to attend. I’d been to an ALA Annual conference before and I know those are insane, but this was Midwinter, and I just didn’t think it would be anywhere close to that.
Mostly, I was right. It was a small fraction of the size, with a small fraction of the amount of panels, discussions, and exhibits. However, it was just so calm and peaceful. Maybe I’m comparing it too much to BEA, which I’ve been going to for a few years now in NYC. But seriously, Midwinter was like a nice, slow Alice in Wonderland tea party compared to the sometimes Hunger Games type atmosphere of BEA. And the best part? There were books everywhere!
I didn’t need to time my exhibit hall strolling/mad dashing to be at the right place for the right book drop. Books stayed dropped for a long time. And if I missed a drop, I asked for a certain book and then was 3 times out of 4, given that book. The people at the booths were all friendly (minus one publishing company, which never seems to have friendly people, ever). And while I wish there were more discussions and panels about Youth Services or Children’s and YA literature, the ones that did exist were excellent. All in all, I was happily surprised. I wish I was a bit more prepared for the book haul I trucked home with me, but really, that’s a first world problem. I cannot complain about a thing.
I knew I found my home away from home when the first booth I looked at featured an author signing, and a friendly person asking if I wanted to meet Margaret Peterson Haddix…Would anyone say no? There were two people in front of me and I was immediately handed a hard cover of her new book to have signed, and well, I knew it would be a good conference. I only attended one day. I'm sure there would be more books if I went for the whole thing.
The beauties: 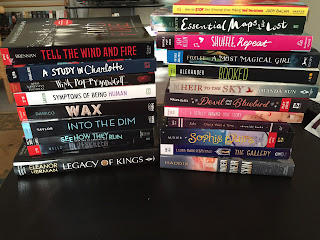 Tell the Wind and Fire by Sarah Rees Brennan (!!!!!!!!!!!)
A Study in Charlotte by Brittany Cavallaro
Wink Poppy Midnight by April Genevieve Tucholke
Symptoms of Being Human by Jeff Garvin
Wax  by Gina Damico
Into the Dim by Janet B. Taylor
See How They Run by Ally Carter
Bluescreen by Dan Wells
Legacy of Kings by Eleanor Herman
How to Stop Your Grownup from Making Bad Decisions by Judy Balan
Essential Maps for the Lost by Deb Caletti
Shuffle, Repeat by Jen Klein
A Most Magical Girl by Karen Foxlee
Booked by Kwame Alexander
Heir to the Sky by Amanda Sun
Devil and the Bluebird by Jennifer Mason-Black
A Totally Awkward Love Story by Tom Ellen and Ivison (signed)
Once Was a Time by Leila Sales
Sophie Quire and the Last Storyguard by Jonathan Auxier (signed)
The Gallery by Laura Marx Fitzgerald
Under their Skin by Margaret Peterson Haddix
How was your week in books?
Posted by Nori at 2:04 PM