The Red Queen by Victoria Aveyard 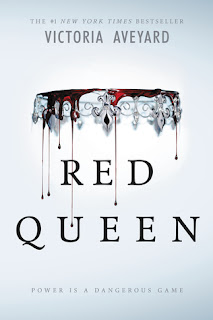 Summary on Goodreads:
This is a world divided by blood – red or silver.

The Reds are commoners, ruled by a Silver elite in possession of god-like superpowers. And to Mare Barrow, a seventeen-year-old Red girl from the poverty-stricken Stilts, it seems like nothing will ever change.

That is, until she finds herself working in the Silver Palace. Here, surrounded by the people she hates the most, Mare discovers that, despite her red blood, she possesses a deadly power of her own. One that threatens to destroy the balance of power.

Fearful of Mare’s potential, the Silvers hide her in plain view, declaring her a long-lost Silver princess, now engaged to a Silver prince. Despite knowing that one misstep would mean her death, Mare works silently to help the Red Guard, a militant resistance group, and bring down the Silver regime.

But this is a world of betrayal and lies, and Mare has entered a dangerous dance – Reds against Silvers, prince against prince, and Mare against her own heart.
Review:
I’m getting a little tired of YA dystopias. That being said, I knew going into this, what this was. I wasn’t expecting it to all of a sudden shift into a sci-fi novel. Based off the description, I knew it would be formulaic. I wasn’t expecting to love it. Mostly, I was feeling like I was in a dystopia type mood. I needed something that wasn’t fantasy or contemporary, and this just felt like the right book at the right time. I was right.
I ended up liking this one a lot more than I was even anticipating. It turns out that I need a good dystopia every now and then –something dark and fast paced. It was hard to put the book down. I found myself running late to things because I’d want to finish a chapter and then another one. It was a compelling story.  And I never felt like putting it down.
The formula of the plot of this novel though was very familiar. There’s a chosen girl type trope. There’s a revolution brewing. There’s a love triangle/square. And there’s the girl who will spark the change for everything. I kind of called all the twists and surprises from the beginning because this is a formula I know very well. This is both a good and a bad thing. Bad, because I prefer to be surprised. But, good, because I kind of was craving a formulaic story like that after the destruction of my emotions from the previous book I had read. Sometimes, I need something I can easily swallow after a tougher/more emotionally intense book. It eased my pallet, so to speak.
That being said, I’m not sure I would have enjoyed this as much if I weren’t treating it as a YA pallet cleansers of sorts. It was really just the right book at the right time kind of scenario.
None of the characters particularly stood out for me. The bad guys were the typical bad guys. The main character was interesting, but I never felt super connected to her. Besides her being a great thief, there wasn’t a lot of back-story to her character. It was all about her learning to be an upper class silver blood. And I kind of didn’t care about all that stuff too much because I didn’t really get to see her as a poor red blood for very long.
The world was interesting, but I have seen similar worlds before in many dystopias. Generally though, I’m used to seeing the characters with abilities and supernatural powers being treated poorly and the regular humans taking charge (like in X-Men). So, the reversal of that was interesting. In this world, those with super powers were in charge. And, I guess this made a lot of sense to me.
All in all this was an okay book that I liked a lot more than I was expecting to. I read it at the right moment. It cured a book hang over from a much better, yet more emotionally devastating book. It served its purpose. I’m not sure how inclined I am to read the sequel. Though, I loved the fast paced action. I give this one 7/10.
Posted by Nori at 6:23 PM