Magnus Chase and the Gods of Asgard: The Ship of the Dead by Rick Riordan and read by Michael Crouch 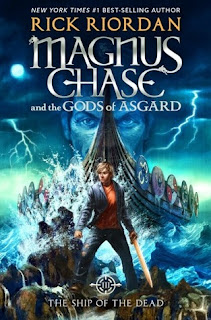 Summary from Goodreads:
Magnus Chase, a once-homeless teen, is a resident of the Hotel Valhalla and one of Odin's chosen warriors. As the son of Frey, the god of summer, fertility, and health, Magnus isn't naturally inclined to fighting. But he has strong and steadfast friends, including Hearthstone the elf, Blitzen the dwarf, and Samirah the Valkyrie, and together they have achieved brave deeds, such as defeating Fenris Wolf and battling giants for Thor's hammer, Mjolnir. Now Magnus and his crew must sail to the farthest borders of Jotunheim and Niflheim in pursuit of Asgard's greatest threat. Will they succeed in their perilous journey, or is Ragnarok lurking on the horizon?
Review:
I always think I’ve had enough of this author, but something pulls me back in with each book he writes. I have nothing against Riordan. In fact, I have nothing but respect for the worlds he’s created and the kids he’s inspired to read. He is very formulaic and I always think for some reason that there is no way for his formula to possibly appeal to me again, but it does.  And honestly, this is one of my favorite books he’s written so far.
I love Norse mythology. I had zero to no knowledge of it ahead of reading these books and I love that these books have introduced me to some stories I didn’t know. I love the Norse Gods and how different, yet similar they are to the Greek and Roman ones of Riordan’s other books. But more than the Gods, I love the other characters and creatures. I love the elves and dwarves, and even the giants.
I’m not going to lie; the major reason I loved this book so much was my ship sailed! I was shipping two characters that I really thought were not going to end up together. I shipped them because I sensed this spark between them from the beginning. I loved that they made each other better people –more understanding and kinder. And I totally would have understood if Riordan kept this as a friendship that worked in this way, but I was secretly hoping he’d take it further. And he did! I shipped them as much, if not more than Percy and Annabeth, and like I never shipped any of the characters in his last series (where everyone paired off).
There was this kiss that happened. I literally had to pause the disc (by this point I brought them all into my house from my car because I couldn’t stop listening). All I did for five minutes was squee like a fangirl and hug a pillow to my chest in unexpected happiness.
Romance aside, the story was epic. I loved the whole arc about the mead and needing to best Loki in a match of words. Some of Magnus’ speech almost read like an homage to Harry Potter for me. The whole thing about love and friendship being what makes him better than Loki, was just so classic JK Rowling that I had nostalgia tears in my eyes, in a good way.
I love Magnus. I love that he knows he’s not a warrior and I love having the main character not be a warrior. I love that he genuinely admires and respects his crew. He wants to know all of them, and through this book, he really gets to know them. I loved the continued back-stories for old friends. And I super loved getting more story for other characters too. There was another moment (in Norway) that had me thinking of The Hitchhiker’s Guide to the Galaxy and I know that Riordan reads a lot of great books.
Some of the ending battle scenes with the undead and the cold literally had me pacing while listening. The suspense and action, as always, was spot-on. I love the mythology. I loved the characters. I incredibly adored the romance. All in all, this was possibly my favorite Riordan book to date (formula and all). I give it a 10/10
Posted by Nori at 7:00 AM