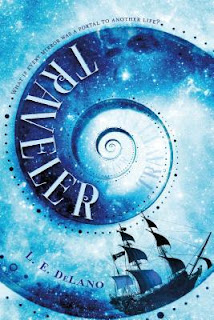 Summary from Goodreads:
Jessa has spent her life dreaming of other worlds and writing down stories more interesting than her own, until the day her favorite character, Finn, suddenly shows up and invites her out for coffee. After the requisite nervous breakdown, Jessa learns that she and Finn are Travelers, born with the ability to slide through reflections and dreams into alternate realities. But it’s not all steampunk pirates and fantasy lifestyles—Jessa is dying over and over again, in every reality, and Finn is determined that this time, he’s going to stop it…This Jessa is going to live.
Review:
This book has been on my radar for a while. The concept of it just sounded beyond cool. It actually kind of sounds like the stories I made up as a little kid. Yes, I made up stories about traveling to another world via the full-length mirror in my parent’s bedroom. I had to read this. It was one of the paperbacks I took with me to Chicago, but that I don’t think I actually read until I got back.
Despite my initial connection to the concept, it took me a little while to get into the story. It starts off like many a cliché YA novel. The main character is a klutz who almost dies on so many occasions. And I didn’t love Finn. I hate instant love stories and I hate stories where fate pretty much tells you who you have to love. If that happened to me in real life, I’d go with the other guy, just to go against what fate was saying. And I hate when the main character can’t see how clearly someone else is in love with them. I’m so tired of all these YA tropes/clichés.
I almost stopped my reading because of all the clichés. But, I’m super glad I kept reading because the story/concept only gets cooler as it goes. And I guess I kept hoping for more run-ins with the Steampunk pirate, and more other worldly travel. And well, I got both. I’m kind of confused reading reviews for this book on Goodreads because people keep referring this as a time travel story…It’s more about parallel worlds than any kind of history.
The adventure and action in the second half of the book almost overshadow all the things I didn’t like right away. There’s a serious cliffhanger at the end that made me grateful for already having book 2. And I have to admit to going right from book 1 to book 2. I give this one a 7/10.
Posted by Nori at 7:00 AM