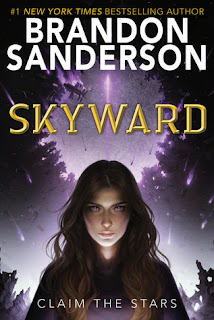 Summary from Goodreads:
Spensa's world has been under attack for decades. Now pilots are the heroes of what's left of the human race, and becoming one has always been Spensa's dream. Since she was a little girl, she has imagined soaring skyward and proving her bravery. But her fate is intertwined with that of her father's—a pilot himself who was killed years ago when he abruptly deserted his team, leaving Spensa the daughter of a coward, her chances of attending Flight School slim to none.

No one will let Spensa forget what her father did, yet fate works in mysterious ways. Flight school might be a long shot, but she is determined to fly. And an accidental discovery in a long-forgotten cavern might just provide her with a way to claim the stars.
Review:
I love this author. I love his YA, I love his kids books, and I love his adult books. No one, and I mean no one, can do world-building like this. I’ve never read his sci-fi before. This might actually be his first sci-fi novel…I’m not certain. I knew though that if this book read anything like his fantasy, that it was going to be filled with amazing settings, characters, and adventures. And I was right. Sanderson’s epic world-building skills is not just limited to his fantasy; it expands universes in this book and it was insane.
There was a definite Star Wars vibe to this book. The storyline with Spensa’s father’s “mistake,” the enemies fighting in space ships, the underground world, and the whole epic tale vibe just screamed that this was a story Lucas would kill to get his hands on. But, it was also more than that. The story also kind of felt like classic fantasy. It had a pinch of Tolkien, and a cup of Tamora Pierce in it. It was reminiscent of some of the best.
It was also, clearly its own unique story. I loved Spensa. She was so strong, confident, and assertive I couldn’t help but love her. I loved her passion and determination. She kind of reminded me of Meg, from A Wrinkle in Time. But, I also loved how much she was capable of learning. Her confidence takes a few nose dives (ignore the pun) and she’s willing to admit she was wrong about things and has things to learn. I loved how she changes and grows through the story. It was a great coming of age story.
I also adored the side characters. Everyone from her crew, to her teacher, to her grandmother were just amazing. I maybe have even begun shipping her with someone she may or may not ever end up with.  I loved the back-stories she learned about her people and about what makes someone a coward.  There’s this great quote, I marked down and read over and over: “It has always seemed to me that a coward is a person who cares more about what people say than about what is right. Bravery isn't about what people call you, Spensa. It's about who you know yourself to be.”
This book was filled with battles, something I don’t normally enjoy, but in this case I really did. I guess it helps if the battles are all in space, with excellent communication going on between team-mates over the air waves. I also liked the whole mystery of it all. Like, what was really going on here with the Krell? What were the cadets not being told? What really went down with Spensa’s dad?  Those questions kept me hooked. And so did the fast-paced story.
All in all, this was a great book. I highly recommend to readers who love world-building and action. I give it a 10/10.
Posted by Nori at 7:00 AM