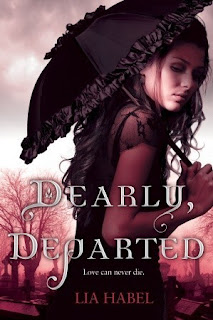 What a crazy, wonderful book! It was recommended to me a long time ago (Thanks, Christina!), and I knew I would love it because: zombies, Victorian time period mixed with the future(…explain more later), dystopia elements, girls fighting past their limited boundaries, and spread of a virus/aka: zombie apocalypse, all equate to awesome in my book. The one weird thing about the description that was sort of off-putting was the zombie/living girl romance. The publishers really pushed this as a new forbidden romance type YA book (Hello, pink cover!). And it kind of prevented me from reading it sooner.
The book was way less romance heavy than I thought it would be (based off of the description and girly cover), and I was thankful. It was more about this crazy society in the future that actually chose to live in a Victorian-esque life style versus a more modern one. There’s modern technology like computers and TV’s; it’s just that’ the TV’s are in the horse drawn carriages. And while people have cell phones, women still need to wear corsets and aim to marry good husbands.
I very much related to Nora, the main character, though this probably was because I kept substituting the “a” for an “i,” and making the main character named Nori, instead of Nora. Though, it’s also hard not to immediately feel empathy for someone who just lost her father and prefers to watch old war documentaries to going to dances and husband searching. Unfortunately, Nora lives with an aunt who is all about husband searching. She apparently has already spent most of the money Nora’s father had left for her family, and is now relying on Nora to do what any attractive lady should want to do.
Everything changes when Nora’s house is attacked by zombies. She climbs up a rose bush, finds her father’s gun, gets to the top of the roof of her house and is a pretty good shot, considering she doesn’t know that the only way to kill or even defer a zombie is by shooting them in the head (or cutting their head off).  Soon, Nora is rescued by a band of more normal-seeming zombies.  There’s a big section of the book where Nora learns to trust that not all the zombies are the same. A lot of zombies are very much like the humans they were before they died. And all the good zombies Nora grows to befriend are connected with her father’s work.
Apparently, the father she has been mourning for a year is actually alive, or well, undead. The government has been hiding its knowledge of the spreading zombie disease. There’s all sorts of political problems involving the prime minister. The bad zombies also have an army, and their major intent is to destroy Nora and her father. There’s also the somewhat brain dead zombies that just want to eat people. There’s the Royals (the people living in Victorian society) and there’s the Punks (those that live outside it), and there’s soldiers and zombies it seems on both sides. Overall, it’s a very good thing that Nora knew her military information.
Also, Habel likes to switch point of views a lot. And at first this really annoyed me. I loved Nori (cough…), I mean Nora and was angry whenever I had to read about anyone else. And before you go thinking that this means it only goes back and forth between Nora and the good zombie she’s meant to fall in love with, don’t make assumptions. Habel goes into the minds of Nora’s best friend, Pamela, who by the way is completely awesome. She does things how she assumes Nora would and in doing so, saves the lives of multiple people, gets her family to safety in the midst of a zombie apocalypse, kills zombies without even realizing the rule about needing to decapitate them, defies the Victorian female stereotypes all over the board, and really just made the book so much more fun than it would have been without her!
Sometimes the chapters are in a bad soldier’s point of view, which allows readers to seriously see how prejudiced people can be against all zombies (good and bad). And sometimes the point of view shifts to Nora’s undead father, who has been captured and blackmailed into scientifically figuring out a cure. And well, how can I not get sucked into blackmail, captures, revolutions, backstabbing, zombie cures, an apocalypse, and rescue missions? Seriously, this book has it all.
One of the common threads I see in people’s reviews who don’t love this book as much as I do, is that there is too much going on. And I get what they’re saying. Sometimes there is so much going on, I lose track of my focus and I’m never really sure where the author wants me to focus –what threads are important and necessary for my overall understanding and enjoyment? But, I kind of liked the mayhem. I liked figuring out for myself what direction to go in. However, I understand this totally not working for a lot of readers.
I absolutely loved the characters in here. I loved the points of view shifts (even when it goes into the head of the bad guy). I loved the fighting. I loved the politics. I even loved the somewhat off-putting zombie/person romance. In the case of Nora and Bram, it just worked. You’ll have to read it to understand. Plus, it doesn’t hurt that Bram just is completely amazing and has such a kind soul. The book does go a little overboard with its various components, but for me this added to the overall fun and zombie craziness as a whole. I give this one a 10/10. Just know going into it, that it is a little chaotic and that it is so not all about romance. Also, you can’t be squeamish with this one.
Posted by Nori at 10:18 PM