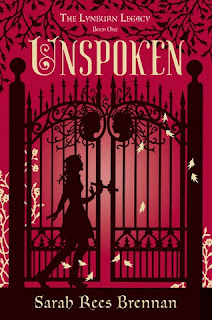 So, I have been on a serious reading frenzy, pretty much reading a book day for the last month or so (with one exception for a book I didn’t like as much as the others and will be reviewing later this week). This book by Brennan is kind of a book I wish I read more slowly and savored because it was just so wonderful and dark and funny and had the perfect amount of teen angst. It was also so British, and well I love all things British and it’s stuff like this book that reminds me why.
I’m reviewing my ARC copy, but the book came out Tuesday. And I think I may have to get a finished copy at some point. This is so a book I want to own a physical copy of. Any way, it’s about Kami, a girl who has grown up standing out in the small town, Sorry-in-the-Vale. She stands out because she is routinely caught standing by herself staring off into space and sometimes talking to someone no one else can see or hear. As a child, the town called Jared, the boy she was always talking to, her imaginary friend. But, you’re not supposed to have imaginary friends once you’re a teenager…
Kami tries to tone down her “imaginary” conversations when out in public, but the whole town already kind of sees her as crazy. This in no way, shape, or form prevents Kami from being one of my all time favorite YA main characters. She is so sarcastic and intelligent. She starts her own school paper, negotiates with the school to have a headquarters for the paper, and immediately goes into Lois Lane reporter mode. Kami is curious about everything and is so determined to figure out the mysteries of her centuries-old town. She has some amazing friends who all look to her as the leader because well, it’s always Kami who comes up with all the ideas and crazy plans to do things like steal files out of a lawyer’s office or investigate a hotel she’s not supposed to be in. She’s also the bravest one.
One of the reasons she’s always been so brave is because she has never ever really felt alone. When she discovers that someone in her town has been mutilating animals, does she run home like a normal person and tell the police? Well…, yes she does, but first she investigates. She likes to go into the woods by herself, breaks into a lot of places, and writes her stories. She has even been attacked by someone she couldn’t see, but refuses to stop investigating.
All this changes though, when the Lynburns move back to their giant manor. For starters, all the girls are in love with one or the other of the two Lynburn teenage boys who start school with them. For another, it becomes painstakingly clear that Kami’s mother is hiding something about the Lynburn family. Oh, and then there’s the scene in the elevator at the library where Kami realizes that the boy in her head, Jared, is actually a real person; he’s Lynburn. And she’s not actually crazy. (Hand’s down, this is the best scene in the book!)
Realizing she’s not crazy and simultaneously having to deal with Jared as a real person is a lot for a girl to have to mentally take care of. Also, it’s one thing to have no privacy from a possible figment of the imagination, and it’s quite another to have no privacy from a cute teenage boy, who you are most probably falling in love with. And Kami is definitely someone who likes her privacy, who likes being in control, and most definitely doesn’t like people knowing how she’s feeling all the time. And then of course the mutilated animals escalate to murdered human beings (particularly teenage girls). Throw in a little bit of paranormal sorcery and well this book takes awesome to a whole other level!
There’s a love triangle that is so good! Jared is such a fantastic character! All I want to do is help him! It’s clear that his family situation sucks. His mother never loved or wanted him and his father was an abusive jerk, leaving behind so many scars. And everyone seems so intent on hating him. I love his relationship with his cousin, Ash, and how competitive the boys were for Kami. I loved Kami’s lazy best friend who really only seemed interested in naps and spending time on couches. The sarcasm, the wit, and the humor in this book really had me laughing out loud for whole sections.

While there’s a love triangle and Kami is trying to figure things out romantically, it’s always clear to readers that boys do not come first. In fact, they don’t even seem to come in second. Kami definitely puts herself above everyone else(!!!!) She is such a strong, confident, leader and I loved her all the more for this. And she values her friends and family to the highest regard. It was also so nice to read about a main character who has two loving parents. Yes, her mom had some serious secrets, but still. Family was sacred to her.

There’s also this classic literature/gothic feel to the whole book that really makes it stand out for me. Brennan has this magical ability to sound like Charlotte Bronte, Libba Bray, Louise Rennison, and Maureen Johnson all at the same time. Seriously, her writing is just so amazing. To able to sound like a Gothic writing genius and somehow also be hilariously British, and have wonderful and believable teen drama too is just pure amazing. It was like a YA feast for the senses. I laughed, I cried, I gasped out loud at the end, and I am nothing but super impressed. I cannot wait for the second installment. In fact, I think I will be tracking down all other books written by this author and immediately adding them to my TBR pile. Of course this gets a 10/10. It’s one of my favorite books of the year.
Posted by Nori at 9:12 AM