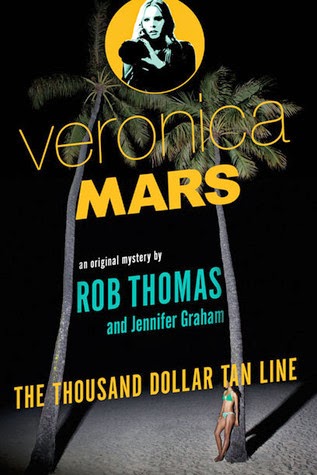 Summary (from Goodreads):
From Rob Thomas, the creator of the television series and movie phenomenon Veronica Mars, comes the first book in a thrilling mystery series that picks up where the feature film left off.

Ten years after graduating from high school in Neptune, California, Veronica Mars is back in the land of sun, sand, crime, and corruption. She’s traded in her law degree for her old private investigating license, struggling to keep Mars Investigations afloat on the scant cash earned by catching cheating spouses until she can score her first big case.

Now it’s spring break, and college students descend on Neptune, transforming the beaches and boardwalks into a frenzied, week-long rave. When a girl disappears from a party, Veronica is called in to investigate. But this is no simple missing person’s case; the house the girl vanished from belongs to a man with serious criminal ties, and soon Veronica is plunged into a dangerous underworld of drugs and organized crime. And when a major break in the investigation has a shocking connection to Veronica’s past, the case hits closer to home than she ever imagined.

In Veronica Mars, Rob Thomas has created a groundbreaking female detective who’s part Phillip Marlowe, part Nancy Drew, and all snark. With its sharp plot and clever twists, The Thousand-Dollar Tan Line will keep you guessing until the very last page.
Review:
This was the book I took with me to NYC. I read it on my train rides to BEA and I read it while in line to meet authors. Four different people (at different times) asked me if I picked up the book at the conference. Clearly, Rob Thomas should have made an appearance at BEA…
I need to say I’m a hardcore fan of this tv show. I backed the kick starter for the making of the movie. I even received my digital copy of the movie the day it hit theaters. I have watched and re-watched the show enough times to quote it. That being said, I was not quite sure what to expect with the book series.
I had to own it, of course. I bought it as soon as it came out. And I certainly enjoyed it. Did it hold the same level of snark, dark humor, intelligence, and awesomeness of the show? No. Did this matter to me? A little. I guess I’m at the point where I will take any form or medium that is this show. I will take more movies, more episodes, more writing. Frankly, it’s such an amazing story, with some of the best characters out there. More is good.
I do feel like the writers were almost trying too hard to make Veronica sound just like she did in the show. And, well this didn’t work so much for me. One of the coolest things about the show was that Veronica was always tying in new jokes, new one-liners, and new references to other things. This book didn’t have so much new, and instead had a lot of repeated one liners from the past…I think Veronica, being as smart as she is, and as fresh and snarky too, would have come up with a few new things to say since highschool and college.
I was also slightly disappointed that Veronica wasn’t smarter…I was so looking forward to being inside her head. The show and movie could go from one scene to the next without having to explain what Veronica was thinking, and this made the girl seem almost super hero smart. Cause I would constantly go, “Oh! How did she think of that?” And I was constantly wondering what was going on in her fast paced brain. Now, I finally have a chance to see what the girl is thinking, and there’s nothing too amazing in my opinion. The book kind of did the skipping to the next moment thing a lot, like the show did, but in book format, it just didn’t work as well.
Also, couldn’t the series have started once Logan returned from his term away? I seriously missed him. And like with the book idea, I’d take any form of Logan (book, movie, tv show, daydream, etc.).
I found the mystery to be really good. They threw in the cartel! And I felt like I was referring back to some old Breaking Bad knowledge I have stored away.  I found the whole thing with Veronica’s mom to fit in really well. I also kind of loved how things tied together or didn’t tie together with past mysteries. I loved the role Mac played in the investigating. And I loved Veronica’s dad’s relationship with Wallace. Really, there are just so many interesting, and real characters here.
The story read quickly. The mystery was addicting. It was wonderful getting to see so many past characters. It frankly was just wonderful to get any more Veronica Mars in any way possible. However, I felt like the book could have been a little fresher and newer. I wish it didn’t repeat so many old things. I also wish Veronica came off as a little more intelligent/gifted than she did. I wanted more Logan too. I had a lot of fun reading it and I will most definitely continue to read more if they are written. I give it a 7/10.
Posted by Nori at 7:00 AM