Amulet: Prince of the Elves (book 5) by Kazu Kibuishi 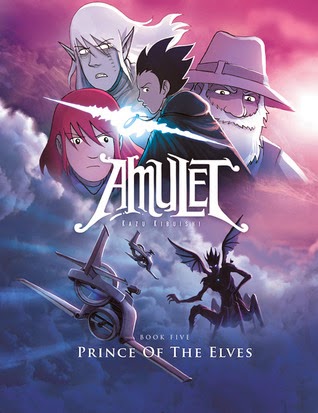 Emily survived the chaos of the Guardian Academy, but Max Griffin has stolen the Mother Stone. With it, the Elf King forges new Amulets that will give him the power to invade and destroy the nation of Windsor. Emily and her friends lead the soldiers of the Cielis Guard in a fight to stop him, but Max stands in their way. And when she seeks information from the Voice of her Amulet, she discovers that the Voice is much more sinister than she ever could have imagined.

Again, I am blown away by this artwork. It is just so pretty. The details of the landscapes and the panoramic views of this crazy world are always my favorite pictures.

What Kibuishi has become so skilled at is his ability to only release tidbits of information at a time, while continuing to surprise you. I like not knowing all there is to the stone, and learning more with each book. I also like getting to know certain characters better in later installments. This book certainly painted Max in a completely different light. It’s always nice getting to know why bad characters behave the way they do.

I was also glad to see more of a role for Emily’s brother. He doesn’t get a lot of spotlight in all of the books. And I find him particularly interesting. I still want to know more about why everyone just thinks of him as a commander. Also, the ships/robots/creations in this one were insane! I could easily recommend these books to Star Wars fans because of these futuristic machines.

It was also super interesting to be able to learn more about the elf characters. I felt bad for the group’s elf components from the beginning. They don’t even get to have much color to their illustrations. No one likes them. They have such a bad rep because of the king. But, it’s clear that the elves traveling with Emily are not like the king at all. And one of the things that impressed me right away about Emily’s brother was his affection for them, and his ability to see beyond what everyone else does.

It’s hard to talk about these books without giving away too much of the story. So, I’m cutting myself off from plot-chatting. However, know that with each book the artwork gets more amazing, the characters get more interesting, and the plot definitely twists and turns in unexpected aways. I love that this book can surprise you and I don’t feel like I already have all the answers. I can’t recommend this series enough. This book gets a 10/10. I can’t wait to start the ARC I picked up at BEA!
Posted by Nori at 4:56 PM