All These Things I've Done by Gabrielle Zevin 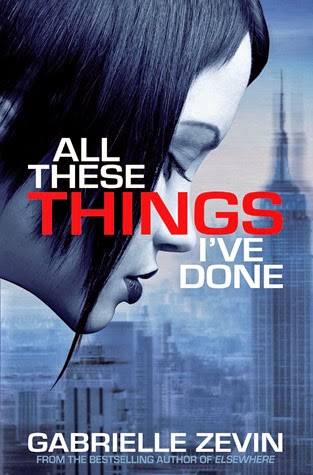 Summary (from Goodreads):
Sixteen year-old Anya becomes the head of a mafia family after her parents are both murdered by rival gangs. Although Anya is embroiled in the criminal world, she is determined to keep her brother and sister out of the mafia family, but her father’s relatives aren’t so keen to let them go. When Anya’s violent ex-boyfriend is poisoned with contaminated chocolate – chocolate that is produced illegally by Anya’s mafia family – she is arrested for attempted murder and sent to the notorious jail on Manhattan Island.

Eventually she is freed by the new D.A. in town, who believes she has been framed. But this D.A. is the father of Win, a boy at school to whom Anya feels irresistibly drawn, and her freedom comes with conditions. Win’s father wants to be mayor, and he can’t risk having his ambition jeopardized by rumors spreading that his son is seeing a member of a notorious crime family. Anya knows she risks the safety of her family by seeing Win again, but the feeling between them may be too strong to resist...
Review:
I was expecting a little bit more dystopia and a little bit less teen mafia story…Am I complaining? Absolutely not. The Godfather is one of my favorite movies (and it’s a decent book too). I love a good mob story. I find that world both terrifying and fascinating. And not only did this book have similarities to some of the best mob movies out there, but it even quoted the Godfather.
I loved Anya. She’s an orphan middle child who has to take care of her two siblings. Her older brother is developmentally delayed (after an accident involving the murder of their mother). And technically, the guardian of the family is their sickly grandmother. However, she’s practically on her deathbed for the whole thing. Anya runs the show. And I love her for it. She puts her siblings to bed, goes to them when they have night terrors, makes dinners, etc. She also goes to Catholic school and has a strong sense of faith.
On top of that she also navigates the crime world that her father kind of left for her. She deals with the godfather, with guns, with illegal substances (in this case, chocolate), and she genuinely follows the crime-world protocol in regards to behavior and what she learned from her father about family and respect. While she doesn’t really want a part of this world that involved the killing of both her parents at a relatively young age, she also can’t ignore it completely.  I was so holed up in this story, I was sad when it ended.
The side characters are great too. Between her sassy best friend, her terrible ex, her family friend from Japan, her siblings, her decaying grandmother, and her overbearing teachers there wasn’t a single person who didn’t feel real to me. Zevin knows how write complicated characters. I liked the love interest. I found him to be real too. I liked that he presented challenges for Anya that she never had before. When you love someone, all your past (non-loved) boyfriends seem so ridiculous. What I love the most about the romance is that I never felt like it trumped everything else. Anya even says at one point that she loves Win, but she loves her brother and sister more. Her family always comes first.
The one thing I wish this book had more of was world building. It takes place in a future where coffee and chocolate are illegal. Water appears to be running low (people are only allowed to use so much water each week). Paper doesn’t exist any more (so all books are antiques). But, there’s no explanation for why things are the way they are. How did the world get to be this way? And why is chocolate a crime??? I wanted to see more of what people looked like and were wearing. I wanted to see the pool. I wanted to see more of the world in general.
I’m interested in seeing how things end up. How far into the crime-world does Anya go? Does she follow her mom or her dad’s footsteps? And what will happen with Win and Win’s father? I need to know these things. Thankfully, for the second time this week, I’ve read a book that I believe has the whole series complete already, so I can go find the sequel soon. I give this a 9/10.
Posted by Nori at 7:00 AM