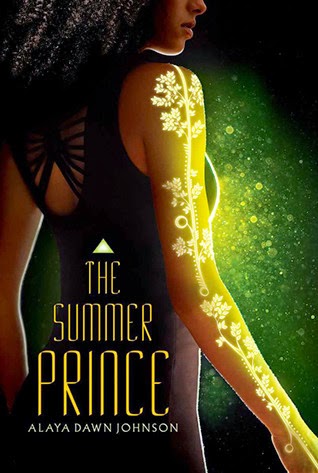 Summary from Goodreads:
A heart-stopping story of love, death, technology, and art set amid the tropics of a futuristic Brazil.

The lush city of Palmares Três shimmers with tech and tradition, with screaming gossip casters and practiced politicians. In the midst of this vibrant metropolis, June Costa creates art that’s sure to make her legendary. But her dreams of fame become something more when she meets Enki, the bold new Summer King. The whole city falls in love with him (including June’s best friend, Gil). But June sees more to Enki than amber eyes and a lethal samba. She sees a fellow artist.

Together, June and Enki will stage explosive, dramatic projects that Palmares Três will never forget. They will add fuel to a growing rebellion against the government’s strict limits on new tech. And June will fall deeply, unfortunately in love with Enki. Because like all Summer Kings before him, Enki is destined to die.

Pulsing with the beat of futuristic Brazil, burning with the passions of its characters, and overflowing with ideas, this fiery novel will leave you eager for more from Alaya Dawn Johnson.
Review:
I’d like to just take a moment to thank Alaya Dawn Johnson for actually creating a future world/fantasy world/dystopia world/cyberpunk world where women are not oppressed or anywhere near the bottom of the food chain. Finally, there is a future where women are in charge! And yes, this future world is also heavily flawed. There can be so much commentary on the connections between the economic divide in Palmares Tres and the economic divide in the US right now. But, I am so happy that there is finally a fantasy world ruled by women. More please.
Also incredible was the setting. I have never read a YA book that takes place in Brazil. And the mixture of this future Brazil’s customs, art, and politics truly made this book unlike anything else I have ever read before. The city literally came to life. (No really, it sometimes talked to the main characters).
The emphasis on both art and technology was beyond cool. June kept creating these urban street art/political statements. And it took me a little while to fully understand what she was risking, but I was completely blown away by her bravery. June is creative, brave, strong, rebellious, and angry. And she was one killer main character.
A lot of this book was confusing and not everything makes sense right away. It took me a while to fully understand the world. But once I did, it was amazing. The book also had a unique take on sexuality. It seemed relatively normal for the characters to be attracted to both men and women. It was one of the most interesting love triangles I’ve read about. June and her best friend (who is a boy –who she lost her virginity to) are both in love with the Summer King. And the Summer King loves them both back…I also don’t think I’ve ever read a YA book where there’s a full scene of the girl main character pleasuring herself. But, this isn’t so much a book about sex or love, so much as it is about art and politics.
This book is definitely not for everyone. It’s a little out there. And it’s not the easiest to read/piece together. It took me a little longer than normal to finish, and it’s not exactly a fast read. It’s a read that needs to take its own time. But reading it makes me feel like a more artistically creative person. It’s a beautiful book. It’s like nothing else I have ever read. And I know it’s the kind of book that will have me thinking for a long time to come. I give it a 10/10.
Posted by Nori at 1:47 PM