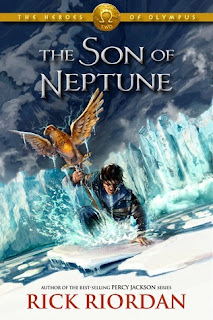 Summary from Goodreads:
Percy is confused. When he awoke from his long sleep, he didn't know much more than his name, even after the wolf Lupa told him he is a demigod and trained him to fight. Somehow Percy manages to make it to a camp for half-bloods. The only thing he can recall from his past is another name: Annabeth.

Hazel is supposed to be dead. When she lived before, she was an obedient daughter, even when her mother was possessed by greed. But that was the problem—when the Voice took over her mother and commanded Hazel to use her "gift" for an evil purpose, Hazel couldn't say no.

Frank is a klutz. His grandmother says he is descended from heroes, but his bulky physique makes him feel like an ox, especially in front of Hazel, his closest friend at camp. He trusts her completely—enough to share the secret he holds close to his heart.

This breathtaking second installment in the Heroes of Olympus series introduces new demigods, revives some fearsome monsters, and features other remarkable creatures, all destined to play a part in the Prophecy of Seven.
Review:
I’m so happy that I decided to re-read all the Percy Jackson books this year and to not give up on the Heroes of Olympus series. This book was so good. I loved it. And I both enjoyed it and read it so much faster than I did The Lost Hero. I had a feeling I would. Everyone kept telling me I needed to keep reading these books, and I finally listened.
I was so happy to have Percy back in the mix! Even though, he couldn’t remember much of anything for the first ¾ of the book, I knew he would eventually, because Jason did. I loved getting to see the Roman camp! One of the reasons, I did not enjoy the first book in this series as much as I wanted to was because of a lot of repepetition about the gods. This one had a little repetition, but not a lot. It was mostly new because the Roman camp and the Roman versions of everything was new for me.
I loved making the comparisons between the Greek and Roman camps. And I loved watching Percy be the hero everywhere he goes. Even with no memories, he’s still the same much loved, brave character from all the other books. I also loved the new characters here. I think Hazel is so fascinating. Everything from her curse to her past life to her bravery was just so cool. And I also loved Frank. I loved that he had to discover what his special family powers were, and that it was more than his Roman background making him stand out.
The action and adventure in this book was top-notch. There were new mythological creatures to meet (like ghosts and the fastest horse in the world). And the appearances of old favorite creatures (like Mrs. O’Leary) made me so happy too. There’s also the Amazons, who run Amazon…So so cool.
I like that different, sometimes minor gods are playing a larger role in this series. Also, it’s interesting seeing Hera/Juno play such a critical role. The prophecy of seven is proving to be as complicated and scary a prophecy as the one in the first series. I’m so curious to see how things end up. I can’t wait to see the Greeks and Romans fighting together to save the day.
I’m also curious to see if the author will write about different mythology in the future. I know he has a Norse mythology series starting this fall. But, there are hints of Chinese mythology and Native American mythology in this series too. There’s so much for him to work with!
All in all, I loved the new story elements. I loved the combining of Greek and Roman. I loved the new set of characters. And I just plain loved this book. I’m not sure how long I can wait before starting book 3. I’ll probably start it tonight. This one gets a 10/10. It might be my favorite Riordan book yet.
Posted by Nori at 7:00 AM