Blood of Olympus by Rick Riordan and read by Nick Chamian 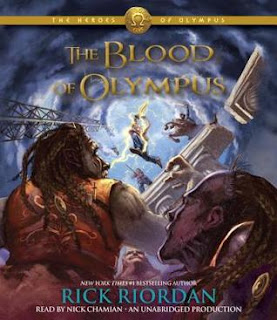 Summary (from Goodreads):
Though the Greek and Roman crewmembers of the Argo II have made progress in their many quests, they still seem no closer to defeating the earth mother, Gaea. Her giants have risen—all of them—and they're stronger than ever. They must be stopped before the Feast of Spes, when Gaea plans to have two demigods sacrificed in Athens. She needs their blood—the blood of Olympus—in order to wake.

The demigods are having more frequent visions of a terrible battle at Camp Half-Blood. The Roman legion from Camp Jupiter, led by Octavian, is almost within striking distance. Though it is tempting to take the Athena Parthenos to Athens to use as a secret weapon, the friends know that the huge statue belongs back on Long Island, where it might be able to stop a war between the two camps.

The Athena Parthenos will go west; the Argo II will go east. The gods, still suffering from multiple personality disorder, are useless. How can a handful of young demigods hope to persevere against Gaea's army of powerful giants? As dangerous as it is to head to Athens, they have no other option. They have sacrificed too much already. And if Gaea wakes, it is game over.
Review:
I have had a marvelous time listening to these books. I’m not the biggest fan of the new narrator, however, I have had so many entertaining hours in my car, and I am so glad I decided to continue with my reading of this series.
I have grown to love almost all the characters by this last book. I’m still not the biggest Piper fan. However, I have grown to love Jason and Leo. It’s been so cool getting to see Percy and Annabeth’s relationship grow over the series. I loved getting to see so many old friends from the Percy Jackson books, but that was seriously the biggest treat I could I hope for –Percabeth.
Also, I love Nico! I’m so glad he had a voice/point of view in this last installment. I think I loved his chapters the best. Watching his friendship with Reyna grow over their quest to retrun the Parthenos was just so much fun!
Almost everything was all tied up by the end of this story. The Parthenos story ended. Everything with Gaea was resolved. And there was even revolution amongst the very divided Greek/Roman Gods. There were all the quests, adventures, humorous moments, and suspense I have come to expect from these books, and really, overall, it was just a lot of fun to read.
I have come to expect a sort of Rick Riordan formula. There’s always a prophecy and there’s always these little quests among the way to figuring out the prophecy and saving the world. I have to admit, each book is so formulaic I became accustomed to zoning out at certain parts, and knowing when I really needed to focus. I both liked this and didn’t like this. I never want to feel like I can skim/zone out pieces of story. The story should be so good that wouldn’t even occur to me. Yet, it’s also nice feeling so familiar with the writing style. I know what to expect from a Rick Riordan book. So, I know when I’ll be in the mood for his next series. I’ll probably read it soon…Sometimes I want a good, predictable layout. What’s not to like about a classic adventure?
I wish there was a little more Percy in this last book. He had no point of view. Though, I can see why Riordan might have wanted this series to be more about the other characters. I do like hearing what Percy’s ending is though. That was nice.
I do also feel like the ending battle was over a little too quickly. One thing leads to another (I won’t spoil what these are), but then that’s it. I guess I was hoping for more of a bang at the end than what I got. I did like a lot of the resolutions, particularly Nico’s and Leo’s. And  I will definitely keep reading Riordan’s books. I hope Annabeth comes into this next series. And I can’t wait for The Trials of Apollo, a series I was lucky enough to hear all about (early!) on Rick Riordan’s tour.
All in all, I enjoyed these books a lot. I give this last one a 9/10. I really like the Rick Riordan formula. I wanted a little bit more from the climax at the end. And I never liked Piper. But, everything was so much fun. I love the humor. I love the characters. I love the whole premise of everything with the Greeks v. Romans. And I love the action and suspense.
Posted by Nori at 7:00 AM