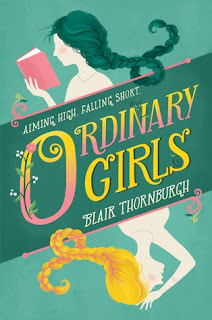 Summary from Goodreads:
Perfect for fans of Jenny Han and Sarah Mlynowski, this heartfelt and humorous contemporary take on Sense and Sensibility follows two sisters—complete opposites—who discover the secrets they’ve been keeping make them more alike than they’d realized.

For two sisters as different as Plum and Ginny, getting on each other’s nerves is par for the course. But when the family’s finances hit a snag, sending chaos through the house in a way only characters from a Jane Austen novel could understand, the two drift apart like they never have before. Plum, a self-described social outcast, strikes up a secret friendship with the class jock, while Ginny’s usual high-strung nature escalates to pure hysterics.

But this has always been the sisters’ dynamic. So why does everything feel different this year? Maybe because Ginny is going to leave for college soon. Maybe because Plum finally has something that she doesn’t have to share with her self-involved older sister. Or maybe because the girls are forced to examine who they really are instead of who their late father said they were. And who each girl discovers—beneath the years of missing their dad—could either bring them closer together…or drive them further apart.
Review:
As I said on Goodreads: It took me a minute to get into the writing style here. At first, it read like the author was trying too hard to sound smart...and it came off as pretentious....but then, magic happened. It was Anne of Green Gables and Little Women And Sense and Sensibility, all rolled into one. The writing style, like the main character, came off in a certain unlikeable way...but then you get to know Plum, and you not only love her, you see yourself in her.
And the story of friendship, of sisters, of first love, and all the things in between were just so real. I ended up hugging this book when I was done with it. It’s loaded with literary references. It reminded me of the book, I Capture the Castle. It’s perfect for a lazy fall afternoon. I highly recommend to book lovers.
I can definitely see a lot of people not finishing this book. It’s hard to like in the beginning. But, I’m so extremely happy I kept going. I just had a feeling that I’d end up liking it, and I was right. I loved the love story. It was so awkward, sweet, and real. It reminded me of my first relationship, and again, there’s me seeing myself in Plum. I loved the family story too.
There’s a definite element of the past in the language of the novel. It feels like a story that could have taken places decades ago, but I guess overall, that’s a good thing. It feels timeless. As does, Sense and Sensibility. I recommend this one to book lovers, to those who loved Jane Austen, and Lucy Maud Montgomery, and to those who have re-read Louisa May Alcott. This is a book for you. I give it an 8/10.
Posted by Nori at 7:00 AM