The Siren by Kiera Cass 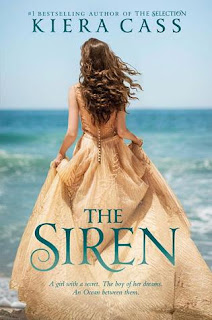 A girl with a secret.
The boy of her dreams.
An Ocean between them.

Years ago, Kahlen was rescued from drowning by the Ocean. To repay her debt, she has served as a Siren ever since, using her voice to lure countless strangers to their deaths. Though a single word from Kahlen can kill, she can’t resist spending her days on land, watching ordinary people and longing for the day when she will be able to speak and laugh and live freely among them again.

Kahlen is resigned to finishing her sentence in solitude...until she meets Akinli. Handsome, caring, and kind, Akinli is everything Kahlen ever dreamed of.

Falling in love with a human breaks the Ocean’s rules. But for the first time in a lifetime of following the rules, Kahlen is determined to follow her heart.
Summary:
I enjoyed reading this one a lot more than I thought I would. I’ve seen the mixed reviews. Also, I wasn’t sure I’d love a Kiera Cass romance without a dystopian backdrop. I was worried it would be too much like every other YA paranormal romance.
I’m glad I was mostly wrong. For starters, I had troubles putting this book down. I was needing a book like this, something addictive and not too intense to get me through a busy work week. This book was just what I needed.
I love that the ocean was a character. She was a mother and a savior, but also a villain and a destroyer. And I have never read the ocean’s perspective before. I was fascinated. I loved all the layers to her. And I loved her connection to Kahlen, the main character.
That being said, I found Kahlen to be a bit boring. I connected to her introvert-ness. She loved reading and felt so much guilt for all the “singing” she had to do. But, other than that I didn’t find too much depth to her. I actually liked all of her siren sisters better. I wish her sisters were a little more developed, if only because they seemed so cool.
It was great that a major component to this novel was friendship. It was maybe only half about the boy. The rest was about friends and family, and it was super refreshing to have these things be so important in a paranormal romance. I found the mythological/paranormal aspects of the book to be different and fun to read about. I never thought of sirens having contracts with the ocean before. Or leading normal lives between all the destructive singing.
There were also some clear, and fun parallels to Disney’s The Little Mermaid. There was a definite Disney vibe. However, it was dark too. There was a lot of death and grief, and even some abuse and murder. It wasn’t as fluffy as I was expecting. But, I guess that’s kind of how all of Cass’s books are.
I’ve seen multiple reviewers call the romance, insta-love. But, I disagree. I thought it took a long time to build. Months even. She didn’t just meet him once and fall in love. After the first date, it was clear she really liked the guy, but the love thing was a long time coming. I liked that they both seemed to be old souls. They both knew love, loss, and pain. And Cass excels at writing romance.
Kiera Cass has a clear voice. This book was both similar and different from her others. I feel like I’d be able to tell it was her if I didn’t read who the author was. Yet, the story is different enough that I think some people who didn’t like The Selection might enjoy this one. Though, I don’t see why people who liked her past books wouldn’t also enjoy this one too. The romance is fun. The plot was interesting and different enough from other romances to keep me intrigued. It was a fast read. The ocean made for one cool character. The side characters were interesting. I wish the main character was a little less boring. But, really, I had a lot of fun with this one. I give it a 9/10.
Posted by Nori at 7:00 AM