The End by Lemony Snicket and read by Tim Curry 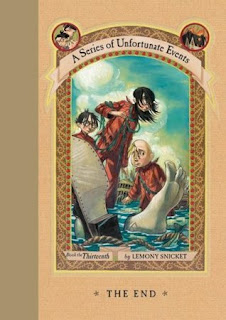 This book is the last in A Series of Unfortunate Events, and even if you braved the previous twelve volumes, you probably can't stand such unpleasantries as a fearsome storm, a suspicious beverage, a herd of wild sheep, an enormous bird cage, and a truly haunting secret about the Baudelaire parents.

It has been my solemn occupation to complete the history of the Baudelaire orphans, and at last I am finished. You likely have some other occupation, so if I were you I would drop this book at once, so THE END does not finish you.

With all due respect,

Review:
I cannot believe I am done with this series.  I had a sad car ride this morning when I realized I had no more installments in the Series of Unfortunate Events. I’ve had so much fun listening to these amazing audio books. My car rides will never be the same.

I also need to comment on how out of this world, amazing Tim Curry is as a narrator. I cannot imagine the narrator of Lemony Snicket with any other voice. Curry did so many voices too. I wish he’d narrate all the best Children’s/Middle grade books. Can they all be re-done with him as narrator?
It’s a little hard to review this one because I feel like I’m still processing all the things that happened. So many things just happened. I learned a lot in this installment. I finally got to learn a little bit about the orphan’s parents. I also learned a little more about Olaf and his sad past. More was learned about Kit Snicket, and of course more was learned about Lemony Snicket, himself.

This one also had the feel of the first seven or so books, where the children kept being taken in by different people. This time, they are taken in by the islanders (mostly people who had been ship-wrecked). And in that regard, this really did feel like a full-circle type of ending. There were memories and lesson learned from previous books.

Again, this one was chock-ful of wonderful literary references, like Robinson Crusoe and the story of Adam and Eve. There’s a reunion with a certain snake. There’s also the birth of Kit Snicket’s baby. There’s the understanding of 2 secret love stories. This book wasn’t quite as funny as the other ones. It still had it’s well-loved absurd humor. But, it was a little darker. There was talk of mutiny and certainly plenty of suspense. There was also a lot of sadness. There was more death. There was an island full of people who constantly gave in to peer pressure (over logic). And there were a lot realizations for the kids.

And so many of the things the narrator says are words I want to freeze, replay, and then write down to always take with me. Words like this:

“There is a kind of crying I hope you have not experienced, and it is not just crying about something terrible that has happened, but a crying for all of the terrible things that have happened, not just to you but to everyone you know and to everyone you don’t know and even the people you don’t want to know, a crying that cannot be diluted by a brave deed or a kind word, but only by someone holding you as your shoulders shake and your tears run down your face.”

And this is the last quote, I promise.

“It is almost as if happiness is an acquired taste, like coconut cordial or ceviche, to which you can eventually become accustomed, but despair is something surprising each time you encounter it.”

Is there still a lot I don’t know? Yes. I would have liked to have learned a little more about VFD, and the fires, and Lemony. But, I actually got a lot more than I was expecting. And I love that the children took their time reading the answers, in their hidden library (underneath a hybrid apple tree). I feel like I can say so much more about everything, but I’m really just gushing at this point.