The Trials of Apollo Book 2: The Dark Prophecy by Rick Riordan 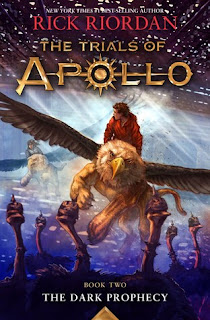 Zeus has punished his son Apollo—god of the sun, music, archery, poetry, and more—by casting him down to earth in the form of a gawky, acne-covered sixteen-year-old mortal named Lester. The only way Apollo can reclaim his rightful place on Mount Olympus is by restoring several Oracles that have gone dark. What is affecting the Oracles, and how can Apollo do anything about them without his powers?

After experiencing a series of dangerous—and frankly, humiliating—trials at Camp Half-Blood, Apollo must now leave the relative safety of the demigod training ground and embark on a hair-raising journey across North America. Fortunately, what he lacks in godly graces he's gaining in new friendships—with heroes who will be very familiar to fans of the Percy Jackson and the Olympians and Heroes of Olympus series. Come along for what promises to be a harrowing, hilarious, and haiku-filled ride.
Review:
I love this series. I love getting a whole series in the point of view of Apollo. What this book has (and book 1) is loads and loads of humor. While Percy Jackson had it’s funny moments, this whole series promises to be one giant, funny moment. And I love that it stands out for this.
That being said, it still reads like a classic Rick Riordan story. He has his formula, and I do admit there were times I grew a bit bored with it. I could never be allowed to be bored for more than a few seconds ever though because of all the action. Riordan excels at writing action-packed battle scenes, monster-fighting, and high-stakes quests. And I guess I get so consumed in the action, that I don’t have time to think about how familiar the formula is. I do know that it’s there, in the back of my head.
I love how diverse Riordan’s books are becoming. His cast is made up of uniquely diverse characters. I also think it’s great that Apollo, himself, is interested in both men and women. He recognizes the beauty in men, women, in the young and the old, and in art and music. He’s more than the full of himself, conceited God who writes haikus at the beginning of each chapter. He sees the beauty in things other characters can’t see.
He’s also becoming more and more likable as the series goes on. He has grown so much over the course of his punishment. He is capable of realizing his own mistakes. He can understand why two women turned away from a gift he once gave them. He even is willing to risk his life for his closest friends! The Apollo at the beginning of book 1 was not like this at all.
I also loved a few reunions that happened in this book. I don’t want to spoil things but it was nice seeing a certain character from the first series again. And I love the character that was brought back at the very end.
I love how much Apollo has grown over the course of these two books. As always, I loved Riordan's humor, suspense, and action. And it was fun seeing old friends from past series too. The ending promises a super, fun couple of books ahead. The book did at times feel a bit formulaic, though the humor and everything else tended to make up for this. All in all, I give this an 8/10.
Posted by Nori at 7:00 AM