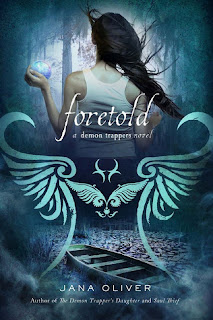 So, I kind of feel like I’m punishing myself lately, reading all these final endings to series. Seriously, it’s March and this is my 6th final book I’ve read so far this year! Why is everything ending? I tend to like endings because so many questions get answered and all the final hookups finally happen! However, it is all so bittersweet because I also know that this is it for these characters. And I have become so attached to Jana Oliver’s characters in the demon trapper series.
I’m normally hyper aware when books I want to own come out. I read more reviews than the normal person and I certainly read a lot of blogs. But, for some reason, this book came out without me noticing! I walked past it at Barnes and Noble (someone left it on a café table), and I went, “What just happened?” How did I not see this one’s release date?
I love, love, love this series! I have been crossing my fingers for Riley and Beck to get together since book 1.  Book 3 definitely ended with a bang. Riley ended an apocalypse of sorts with an ultimate sacrifice. There was also one, long awaited kiss toward the end too! And this final book begins in the aftermath of the battle of the last book. It becomes known to Riley’s friends (fellow trappers) that her role in things is nowhere close to being finished. To solve two problems at once, they send Riley off to southern Georgia with Beck to say goodbye to his dying mother. Beck needs the companionship and Riley needs to get away for a bit.
Unfortunately, Beck has been pushing Riley away. And While Riley is generally pissed at him for a lot of things, she can’t forget that kiss. Her trip with Beck ends up being a lot more complicated then she thought. She finally learns what it is that Beck has worked so hard to keep from her, and that apparently the reporter in the last book is already writing an article on. And soon Riley is working her hardest to clear Beck’s name, on top of finding a murderer (of the human variety), cleaning up Beck’s dying mother’s home, trying to get Beck’s evil mom to be nicer to Beck, and just overall being there for Beck like he was for her when her father died.
There’s clearly a lot of Beck in this book! And I was more than happy to get his story. There’s also the occasional demon trapping, fallen angel conversing, and meet-ups with Lucifer. As Riley and Beck work things out on his end, and finally begin to start a more steady romantic relationship, Riley is also being taken from her bed each night to help fight demons with Ori, the fallen angel from the previous books. Because of where Ori stands in regards to her soul, there are a lot of demons and general bad folks out to get Riley and him. So, he calls in his favors with her so she can help him do his job, but also so he can train her to be an even better demon hunter.
So, there’s a lot of violence in this one too! A lot of loose ends are tied up. There’s some more rather epic drama going on between Lucifer and Sartael. There’s juicy romance scenes, a prom(!), some traveling, limited Vatican involvement, new trappers in training, and a lot of new developments (good and bad) for the trappers!
I absolutely loved getting to know Beck better! Hearing his story and seeing what he had to grow up with definitely improved my opinion of him. There were some seriously scary moments at a swamp that pretty much made me decide to never want to go to a swamp, ever. And of course, there’s Riley, one of my all time favorite YA heroines. Seriously, she is beyond brave, tough, and strong! I loved watching her with the new trappers! I loved how loyal she was to Beck, and how she always stood by him, even when it all got super tough to do so.
I like how things ended for Riley in regards to heaven and hell. I like how things ended with her friends, with her trapper family, and with Atlanta in general. There was a lot of fun moments with the demon hunting tv show! One of the final scenes acted as this complete 180, almost repeat of one of my favorite scenes in the first book, and I’m so glad that was in there because it definitely gave a nice sense of closure. Things ended so hopefully for all the right characters. There are still demons to trap, new trappers to train, and one last favor that Riley owes, but I was beyond happy with this remarkable ending.
The characters were even better because there was even more development in this book. The story was intense and educational. The fighting was action packed. I read it in one sitting. I give this one a 10/10. I give the series a 10/10. And I know I’ve probably said this before, but these books are great for Buffy the Vampire Slayer fans and also Supernatural fans!  I’m just so sad it’s all over.
Posted by Nori at 7:00 AM